Recent release 'Nowhere Too Far' from Covenant Books author Kevin B Bingham is an engrossing read where Andrea, an archaeologist, seeks an escape route after being targeted by evil—all while Earth might be on the brink of extinction. 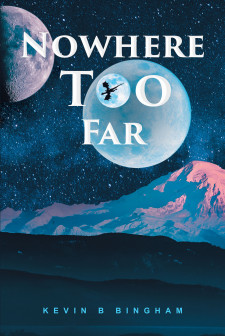 DENVER, November 9, 2021 (Newswire.com) - Kevin B Bingham, a lover of sci-fi who enjoys hiking, camping, fishing, and taking in the breathtaking views of the Rockies, has completed his new book "Nowhere Too Far": a thrilling novel that follows Andrea, a mother and archaeologist, finding herself caught up in danger with a televangelist as the mastermind. Throughout the lefts and rights she was dragged into, Earth is also prophesied to face destruction. Will her wit and courage be enough to stand against these threats? Or will this fatal destruction become her only hope?

Bingham shares, "Over fifty years ago, Dr. Fred Carlson told the world that the possibility existed the Earth could be impacted by a pair of asteroids sometime in the future which may cause the complete destruction of all life on Earth. His warning was disputed and soon forgotten by all except a small group of people called the Watchers. Now that the time was drawing near, a plan to save humanity was developed. As crazy and impossible as it sounded, there was no other way.

"World-renowned female archaeologist Andrea Markes finds that she has become the target of a very popular televangelist, Jonah Grimes. She has no idea why he chose her as an object of evil, but it would seem he is intent on destroying her. She can't let that happen.

"When she learns of the possible destruction of Earth, she is offered a way out. How far is she willing to go to save her daughter and herself? In all of this, God has his own plan."

Published by Covenant Books of Murrells Inlet, South Carolina, Kevin B Bingham's new book brings an action-packed science fiction that looks into the events of a world's end times. Here, readers will see a glimpse of humanity in fragments and people pushed into hopelessness. Everyone might not be able to put this book down before seeing its conclusion.

Readers can purchase "Nowhere Too Far" at bookstores everywhere or online at the Apple iTunes store, Amazon, or Barnes and Noble.

Author Vicki King's new book, 'Adventures of an Old Lady Piano Teacher' is an uplifting collection of reflective short stories
Recent release "Adventures of an Old Lady Piano Teacher" from Covenant Books author Vicki King is a feel-good book consisting of a compilation of stories from throughout the life of a piano teacher. From her childhood on a farm in Mississippi to her thriving piano career and all of the special moments in between, this memoir will surely lift the hearts of readers and provide a bit of nostalgia.
Covenant Books - Jan 27, 2022

Author Sheila Young's New Book, 'God's Plays' is an Encouraging Tale That Shows That Each Person Has Their Own Path Meant Just for Them
Recent release "God's Plays" from Covenant Books author Sheila Young is an uplifting tale of spirituality that ensures each person is meant for their own form of greatness. Even when it feels as if life has sidelined someone, they are not out of the game.
Covenant Books - Jan 27, 2022