"Near Misses" is the enthralling and historically correct memoir of Nelson Edward Jacobs (Jake), a dive bomber in World War II, who survives the war but experiences many setbacks in life. This account gives inside stories of a man who should have been celebrated not victimized through exploitation. 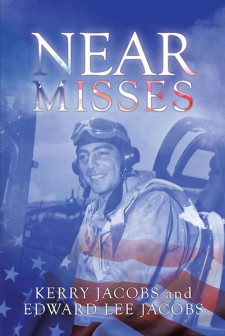 “Near Misses” is the enthralling and historically correct memoir of Nelson Edward Jacobs (Jake), a dive bomber in World War II, who survives the war but experiences many setbacks in life. “Near Misses” is the creation of published authors, Kerry Jacobs and Edward Lee Jacobs, a husband and wife team who both grew up with fathers who were World War II veterans.

How does a man with a quiet demeanor, a sense of humor, loyalty to a fault, and a modest opinion of himself, such as Nelson Edward Jacobs (Jake), survive being a dive bomber during the horrific World War in the Pacific? How does a man who had experienced so much emotional pain throughout life remain so good? This book tells Jake’s story, beginning with unexpectedly joining the US Armed Forces at age nineteen to get away from home. Chronologically, Jake encountered being a China Marine, a dive bomb pilot, an army officer, and a consultant for Boeing all while trying to manage some harsh personal setbacks.

This book shares with the reader Jake’s contentment and strength in the military as well as Jake’s inability to find the right woman. It gives the inside stories of a man who, especially at the end of life, should have been celebrated and embraced not victimized through exploitation.

Readers can purchase “Near Misses” at bookstores everywhere, or online at the Apple iTunes Store, Amazon, Kobo or Barnes and Noble.

Alysha Morlan's new book 'Shelby Sheep Shakes Things Up' is a captivating tale of a young sheep who wants to do many things that are not in her nature
Recent release 'Shelby Sheep Shakes Things Up' from Covenant Books author Alysha Morlan is a touching story about a little sheep who desires to do different things a sheep doesn't normally do.
Covenant Books - Oct 29, 2020

Spencer Steeves' new book 'Everything Under the Sun' is a brilliant fiction about great kingdoms, centuries-long rivals, and destinies
Recent release 'Everything Under the Sun' from Covenant Books author Spencer Steeves uncovers a gripping fantasy that follows two women who face their fate and tackle their personal battles in a series of unexpected circumstances.
Covenant Books - Oct 28, 2020
Newswire