Based on Kazan’s leading-edge NVMe-oF adapter, these JBOF (“Just a Bunch of Flash”) systems represent key building blocks of a fully Composable Infrastructure, enabling next-generation data centers to enjoy huge TCO improvements by disaggregating compute and storage resources into independent pools. Being able to precisely dedicate the correct amount of storage to each application creates significant and sustained increases in storage utilization, thereby solving today’s problem of “dark flash” or unused SSDs that have been installed directly into the application server.

A demonstration of industry-leading performance shows Kazan’s “Onyx” NVMe-oF Bridge Adapter products running inside of a new 2U/24SSD JBOF system from Gigabyte. Sustained I/O rates in excess of 16M IOPS (I/Os per second) shows that a Composable Infrastructure can be deployed with essentially no loss in performance, compared to older DAS (Direct Attached Storage) configurations.

“Gigabyte has been a valued partner to Kazan Networks as we jointly work to finalize NVMe-oF solutions for broad market deployment,” said Margie Evashenk, CEO of Kazan. “Together we are demonstrating unrivaled performance from this system at the show this week, and we have been impressed from the start by the quality of the design which has gone into this Gigabyte system. Bringing our combined products to market now is an important and satisfying milestone for this partnership.”

“We are proud to offer Kazan Networks’ products in our new S260-NF0 JBOF system,” said Sam Chen, Director of Engineering at GIGABYTE. “Up to six of Kazan’s Onyx adapter can be installed, which delivers the high performance and connectivity that our customers are demanding.”

Also being demonstrated by Kazan Networks this week is a comparison between the performance of RDMA and TCP, two of the transports available as part of NVMe over Fabrics™. Visitors to Kazan’s booth can see that performance of NVMe/TCP can – with an optimized implementation – nearly equal that of an RDMA-based transport.

Kazan Networks is now ramping production with both Onyx and its companion Fuji ASIC.  For more information and to see these products in action, please visit Kazan Networks’ booth #700.

Kazan Networks is a privately held startup founded in December 2014 by storage networking veterans. The company is located in Roseville, California. 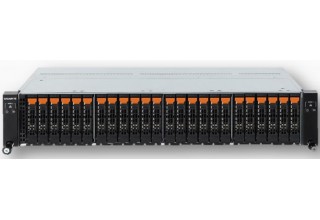 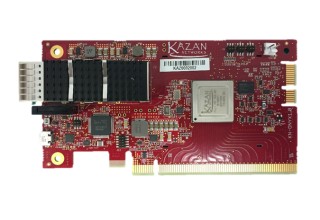 Kazan Networks is a privately held fabless semiconductor company changing the way the world accesses flash storage within the datacenter.