Karma UAV Helping Public Safety 'Get Off the Ground'

Intrensic reports they have already packaged the Karma UAV for Public Safety in large markets like California, Texas, Florida and New York but expect smaller markets to make purchases in the new fiscal year. 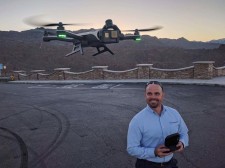 San Mateo, CA, April 18, 2017 (Newswire.com) - A recent Bloomberg article announced that the drone market would reach $127 billion by 2020 and further research shows a large portion of those dollars will be invested by law enforcement, fire services and public safety.

Intrensic's Director of Product Development, Kevin Angell, said, "Our relationship with GoPro has us poised to deploy Karma Unmanned Aerial Vehicles (UAV) nationally to help with search and rescue efforts, scene documentation and property recovery".  Intrensic reports they have already packaged the Karma UAV for Public Safety in large markets like California, Texas, Florida and New York but expect smaller markets to make purchases in the new fiscal year.  Angell said, "because we package the unit specific for the public safety arena, we are able to give them more than just a drone".

Matt Dugas, RPIC and National Director of Sales for Intrensic

The Digital Evidence Management Platform (DEMS), used by Intrensic's Body Worn Camera program, will be provided with UAV packages so that storing, categorizing and retaining videos and pictures is seamless and cost effective.  "A Police Chief called us and said she was spending hundreds on SD cards every time her officer's took aerial footage", remarked Intrensic CEO Kevin Mullins.  Mullins said when he asked the Chief why she said, "I [she] had no place to store the media and was forced to put each separate SD card into evidence".  With DEMS storage, officers in the field can upload video immediately from their Mobile Data Terminal (MDT) or wait till back at the station.  The original SD card can be used does not require additional purchases.

Another concern widely documented by technology research teams and government analyst is the use of 'automatic flight logs' by well-known retail UAV systems.  "We don't spy on the government's use of our UAV.  Flight logs with the Karma UAV are opt-in and if selected all data is stored on US based servers", said Angell when pressed about their product.  Bloomberg reported that competitor drone products are based outside the US and the tone of the article seemed to indicate national security concerns since their flight logs automatically transmit data to foreign servers.

Intrensic has set up a team of FAA Part 107 pilots known as RPIC or Remote Pilot in Charge to demo the Karma UAV.  "The Karma is small, light weight and easily deployable by line level staff," said Intrensic National Sales Director Matt Dugas.  "For recreation, I fly a drone that takes longer to set up, needs additional equipment purchased separately and doesn't collapse down for easy transportation", Dugas continued.  Dugas went on to say that Intrensic provides a rugged, hard side case with wheel to store and transport the UAV.  "Its an added layer of protection for devices traveling in police cars, fire trucks and other emergency management vehicles", said Dugas.

Training, policy creation and support come with Intrensic's UAV for Public Safety offering.  Mullins says, "These are paramount to a successful program and something you just don't get with a hobby shop or big box purchase".

To setup interviews, ask questions of the Intrensic staff or request footage email Denise Zimny, Director of Government and Public Relations for Intrensic at Denise.Zimny@Intrensic.com