Recent release "The Two Witnesses are God the Father and the Holy Spirit - Revelation 11" from Covenant Books author Joel Hernandez is a comprehensive dissertation that tackles all the incorrect interpretations of the identity of the two witnesses and Revelation chapter 11, and their role in the life of Christ, who they are Spiritually in. The book says that Christ, who no one in 2,000 years has ever known, is alive in chapter 11, due to his death at the end of his earthly career, which is alluded to in Revelation 11:8. 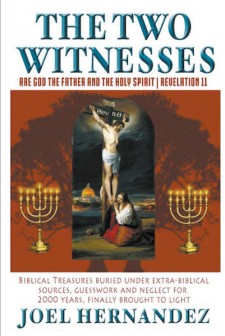 SAGINAW, Texas, November 14, 2019 (Newswire.com) - Joel Hernandez, a Christian writer has completed his new book, “The Two Witnesses are God the Father and the Holy Spirit – Revelation 11”: a masterful compendium of Scripturally founded proofs of the two witness’s true identity.

Joel writes, “In this first volume of my book, I have proved beyond the shadow of a doubt that The Two Witnesses in Revelation 11 are God the Father and the Holy Spirit, which is a fact that none of the ancient or modern-day commentators have ever known in 2,000 years!

"That they are primarily God the Son's Two Witnesses, who are the glorious, omnipotent angel in Revelation chapter 10 who is prophesying to John about his immediate future in Revelation chapter 11, where he has assumed his second nature as Jesus (Rev. 11:8). Nor have they ever known that Jesus is the main and hidden Actor behind the scenes, and underlying dimension of chapter 11, in spite of the fact that his Two Witnesses who are actually 'in him' in chapter 11, as I shall also demonstrate, seem to be the main Actors on the surface as I shall also demonstrate. Or ever known that Jesus is alive in chapter 11.

“Now that the angel has become Jesus, they must be referred to as Christ’s Two Witnesses. None of the commentators have ever taken these facts into account because they never suspected the Two Witnesses could be God, whom they should have considered in the first place! And considered 2 Corinthians 5:19, which says that, ‘God was ‘in Christ’ reconciling the world unto himself.’

This interpretation of The Two Witnesses, which is totally original, is finally going to begin to help readers correctly understand the book of Revelation's symbolism and other Apocalyptic literature which most Christians have had a distaste for, due to all the torturous interpretations and guesswork, forced on it by every commentator and writer, who has ever written on it. And added and taken away from it, in spite of Christ's warning in Revelation 22:18-19. And change the old hermeneutic methods of interpretation that have never been successful, to this Spiritually inspired one.

Readers can purchase “The Two Witnesses Are God the Father and the Holy Spirit—Revelation 11” at bookstores everywhere or online at the Apple iTunes store, Amazon, or Barnes and Noble.

Jamie O'Rourke's New Book, 'My Friend Lucas', Speaks a Highly Relevant Message About How Compassion for One Another Offers an Effective Safeguard Against Bullying
Recent release "My Friend Lucas" from Covenant Books author Jamie O'Rourke is a timely children's book that sets itself up against bullying through its emphasis on friendship, love, and valor.
Covenant Books - Jun 11, 2021

Pam Lile's New Book, 'LEAD ME LORD' is an Inspirational Journey of a Mother Who Finds Hope and God's Great Love Within the Heavy Cross She Carries
Recent release "LEAD ME LORD" from Covenant Books author Pam Lile is an enlightening story of a mother who receives the blessings of God's unfathomable grace despite the devastation of nearly losing a child, as she walked with her son from the shadow of death, returning to a new and different life for both of them.
Covenant Books - Jun 10, 2021