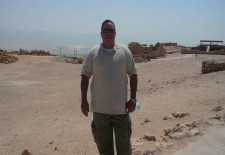 EastVale, CA, April 4, 2017 (Newswire.com) - New scientific evidence has suggested that the Dead Sea, in the distant past, had been hit by severe droughts. Some scientists believe that the area is heading towards a similar event, and that this is further proof of climate change. Jeffery David Whippo, who has a passion for conservation and the environment, decided to visit the area and investigate whether the signs really are there.

He says: "I hiked up the snake trail to the top of Masada first, which is where King Herod the Great built palaces for himself. From here, you can look down on the Dead Sea and really be immersed in history. This wasn't my first trip, I lost my heart to the Dead Sea a long time ago, and that is when I noticed it: the sea seemed to be receding somewhat."

"How is it possible that something found in an area so dry and arid, so close to the tremendous salt levels of the Dead Sea, can be so green?"

In the recent piece of scientific research, core samples were taken from deep below the Dead Sea, which proved that this area of the planet, perhaps more than anywhere else, is incredibly susceptible to climate change. Since this has been uncovered, people like Jeffery David Whippo have been investigating the area for further proof of this, and it is actually a lot more visible than initially expected.

Jeffery David Whippo says: "I then visited the old city of Jerusalem, and particularly the bottom of the Temple Mound, on which the Dome of the Rock, the Islamic shrine, stands. This shrine was completed in 691 CE, a considerable amount of time ago, so it reveals really interesting clues on what the climate has done in the past 1,500 years or so. And again, there were obvious signs of changes in climate, which were obviously much more recent than the ones noted by scientists through the Dead Sea core samples."

Jeffery David Whippo then went on to visit Solomon's stables, an underground vaulted space constructed during the time of Herod. Unfortunately, he was unable to take any samples due to the fact that it is now a Muslim prayer hall. He was, however, able to observe that, around 1099, it was converted to a cavalry stable by the Crusaders, which meant the interior environment was perfect for horses.

From Solomon's stables, Jeffery David Whippo moved on to the Garden of Gethsemane. He says: "The Garden of Gethsemane was where Jesus prayed, and where his disciples slept the night before his crucifixion. It was also where Judas found Jesus on the night of the latter’s arrest. While the history of the garden is absolutely fascinating, what struck me most was the greenery. How is it possible that something found in an area so dry and arid, so close to the tremendous salt levels of the Dead Sea, can be so green?"

Intrigued by his findings, Jeffery David Whippo continued his historical trip and visited the wailing wall, also known as the western wall. Both Greek Orthodox prayers and Muslim prayers are heard at the same time. The wall, found in the Old City of Jerusalem, is made of ancient limestone. The wall, originally, stretched all around the city, although only a very small segment of it remains today. Naturally, Jeffery David Whippo was not allowed to take any samples of the wall itself, but he was able to to retrieve information from local curators on the decline of the wall, which he is currently studying to determine whether climate change has had any role in its decline.

Jeffery David Whippo's most recent tour of Jerusalem and the Dead Sea has left him with more questions than answers. It has, as well, given him a new perspective on the ancient city and its history. At the end of his travels, he went to Caesarea, watching the sun set over the Mediterranean sea. The city, originally known as Caesarea Maritima, was constructed during the time of Herod the Great, between 25 and 13 BCE. Looking at it for the first time through the eyes of someone searching for evidence of climate change, Jeffery David Whippo did notice some key things.

He ends: "While I noticed that the Dead Sea is starting to recede, the Mediterranean seems to do the opposite. Much of the evidence of the old port, and even some of the old administrative buildings of the ancient Judaea Province of the Roman Empire, have disappeared. You must remember that Caesarea was once the capital of the Byzantine Palaestina Prima province, which does mean that some of the original architecture was lost, but this seems to have accelerated over recent years."

Jeffery David Whippo aims to analyze his different findings and samples when he returns home.