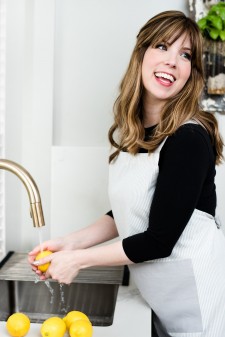 JACKSONVILLE, Fla., March 6, 2018 (Newswire.com) - Passover marks a time when all eyes are on Kosher, but Jamie Geller Media (a division of Kosher Network International) has recorded growth that proves that kosher is making a rise year-round.

For the 2017 year, JamieGeller.com reported a 61 percent increase in users to the popular recipe site with more than half of the 2.5 million users being brand new visitors. The website, with over 8,000 recipes from Jamie Geller and contributors, derives most of its traffic through organic search where users are looking for kosher versions of popular favorites. Total page views increased 31 percent.

It is an exciting time to be the leader in the kosher community. With kosher and other specialty diets taking the spotlight in mainstream media, it has been fun sharing our recipes and content with new followers.

These popular choices show that both traditional recipes as well as new twists on family favorites are still trending in the kosher recipe market. Passover, however, still maintains to be the strongest time of year for kosher with an upwards of 500,000 web users during the five-week spring time-period.

Growth was also seen in the social media channels where Facebook fans increased by 30 percent and their engagement grew 94 percent showing that Jamie Geller’s subject matter was on-trend and buzzworthy. Top posts included both Jewish holiday content and a growing interest in all things Israeli – homemade falafel and Israeli rice, lentils and chickpeas were ranked amongst favorites such as Jamie’s No-Knead Challah. Instagram audience increased by over 100 percent and still continues to grow.

Jamie Geller’s JOYofKOSHER.com has maintained its No. 1 status by a large spread. It is ranked 55 percent higher than other kosher recipe sites by Alexa, an independent website analytics company. Alexa’s Traffic Ranks are based on the traffic data provided by users in Alexa’s global data panel. Those seeking the content Jamie Geller has to offer are majority female, college educated, with kids and a household income of over $100,000 annually. This audience is responsible for the high conversion rates seen by Jamie Geller Media brand partners.

CEO Jamie Geller states, “It is an exciting time to be the leader in the kosher community. With kosher and other specialty diets taking the spotlight in mainstream media, it has been fun sharing our recipes and content with new followers.”

Jamie Geller next appears on the "Today Show" on March 28, it will be her fourth "Today Show" appearance within seven months. On the show, she discusses not only Jewish Holiday content but easier and healthier spins on mainstream family classics.

About Jamie Geller Media and KNi

Whether it's by resonating with the ever-changing kosher consumer through the content it creates or by guiding companies to trade more effectively through the marketing and merchandising channels it opens up, KNi is the No. 1 network for engaging and selling to the global kosher marketplace.

Kosher Network International is both a state of the art consumer insights firm and a soup-to-nuts custom content network that fuses traditional media with the latest in digital.

Colavita Olive Oil and Jewish Lifestyle Expert Jamie Geller to Give Away a Trip to Israel
One lucky winner will win a luxurious 5-Star stay plus a 5-day ground tour of Jerusalem and surrounding sites
Kosher Network International - Sep 12, 2017