"Yes, kids love technology, but they also love Legos, scented markers, handstands, books, and mud puddles. It's all about balance." This quote from an anonymous author accurately sums up how parents should deal with their kids' increased exposure to the digital realm. There is a new world out there, our little ones are not ready to explore yet. BestVPN.co explains why! 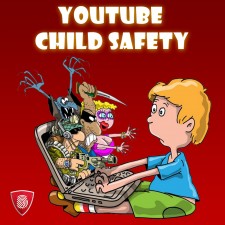 CHARLOTTE, N.C., September 19, 2018 (Newswire.com) - Around three years ago, there was excitement about a Kids app being launched from a reputable video service. Parents were happy that they had easier access to children-friendly entertainment, allowing them to focus on house chores and work life, while kids enjoyed cartoons, animations, and other content on the app.

However, soon after launching, things took a turn for the worse. Some parents reported that their children started becoming too stubborn, played silly/dangerous pranks, while others suffered behavioral problems. It turns out, the app was filled with adult videos that promoted unsafe activities, jokes about pedophilia and drug abuse, pornography, and other sadistic/violent content.

“Don’t make clothes for a not yet born baby” is what most of us hear when stepping into life as a parent, and that’s exactly what we end up doing, placing our trust in the service. Some rip-off videos of famous cartoons like the Peppa Pig, showed the character getting tortured brutally in a dental clinic, while in others he was also found drinking bleach.

Mickey Mouse gets his ears chopped off, Elsa and Spiderman getting it on in the bathroom, and Hulk ingesting an aborted baby is just a few examples of the toxic content children were tricked into watching. Though complaints were made against the app two months after its release, fast-forwarding to 2018, it seems as if nothing has changed. The proof is in the pudding.

The exposure to the online world and video platforms results in early maturing, which can prove detrimental, especially if your kid sees bullying/insolence as a normal thing (a common trait in the majority of the kid-related videos). It is not difficult to imagine the impact. This just emphasizes the fact that a crown is no cure for a headache, and we need to manage things differently.

Parents need to bring about a balance when dealing with their children’s need for entertainment. Advice most needed is often least heeded, but there is a limit to the brainwashing of our kids. This means you need to get your children outdoors. Be an influence, encourage healthy habits, so they leave their phones alone for a while. Most importantly, start these activities when they're young.

“As a father of a curious 7-year old boy, I’m literally feeling dumbfounded seeing the content my kid was tricked into watching. Parents including myself need to be extra attentive towards their children. We need to try to create a balance between the online and REAL world. Talk to your kids, be their best friends, engage in parent-kid activities. Our little ones look up to us. Use that to develop healthy habits, instead of them just watching videos online,” said Muhammad Hamza Shahid, a VPN-Analyst from BestVPN.co.

Founded in 2018, BestVPN.co is the ultimate resource for privacy-concerned users, who want to enjoy an unfiltered and anonymous internet experience. The website helps guiding users through guides relating to privacy, detailed VPN Review, and more.

BestVPN.co Answers the Calling of Bargain Hunters This Black Friday - 70+ Budget-Friendly VPN Deals
It is crowded, it is overwhelming, and it is crazy, welcome to Black Friday. A realm where retailer and eCommerce sites become battlegrounds. People are conquerors and the deals become the hunted. The same goes for the privacy bazaar. Users can find a myriad of VPN specials/discounts. BestVPN.co conducts an in-depth analysis on providers to reveal the most inexpensive choices for Black Friday.
Bestvpn.co - Nov 20, 2018

Free VPN Services Are the Bane of Digital Privacy - Being a Cynic for Anything 'Free' is Necessary, States BestVPN.co
The old adage, 'When you get something for nothing, you just haven't been billed for it yet' from the famous Franklin P. Jones flawlessly defines the uprising of free VPN swindles, fooling customers only to steal their valuable data. BestVPN.co illuminates users on why it is crucial to be pessimistic when dealing with services that claim they are "Free"!
Bestvpn.co - Jul 14, 2018
Newswire