Howard University Board of Trustees Extends President Wayne A. I. Frederick's Contract for a Second Term 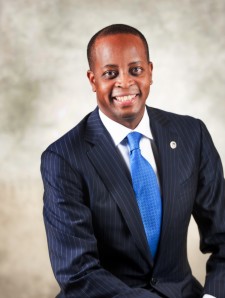 WASHINGTON, D.C., July 28, 2017 (Newswire.com) - The Howard University Board of Trustees announced earlier today the extension of President Wayne Frederick's contract until June 30, 2024 — a five-year extension of his original agreement.

"President Frederick has been a transformational leader for Howard University and the entire Board of Trustees is excited to continue to work together in service to our community in the years ahead," Board Chair Stacey Mobley said. "Because of his visionary leadership, Howard has made great strides in advancing the academic progress of students, enhancing faculty experience, and stabilizing the university's financial position."

President Frederick has been a transformational leader for Howard University and the entire Board of Trustees is excited to continue to work together in service to our community in the years ahead.

After serving the University as interim president for more than a year, Dr. Frederick was inaugurated as the 17th president of Howard University on March 6, 2015 after an exhaustive national search.

"President Frederick has made tremendous progress in forwarding Howard's goals and the mission of the university. We are confident that this positive and exciting momentum will continue," said Vice Chair Mark Mason. "It was incredibly important to the Board that we take a long-term approach and avoid the instability of leadership that seems to be an unfortunate trend today in higher education. Howard deserves a strategic leader and we have that in President Frederick."

According to Board Chair Stacey Mobley, "Throughout his tenure, President Frederick has successfully led innovative efforts to modernize the institution while ensuring Howard continues to uphold its historic mission. Howard is amid incredible transformation. The president has many accomplishments to date, and this extension will ensure we continue moving in the right direction." The accomplishments include:

Development of strategies that optimize impact and drive transformation and modernization

A dramatically improved financial position for the University and the hospital

Advancements in Faculty and Staff Experience

"I am thrilled and honored to continue to serve as President of Howard University, my alma mater and a place so special to me," said Frederick. "I truly appreciate the confidence the Board of Trustees has shown in me through this extension and I can't wait to continue working with my exceptional colleagues in the faculty and on staff to ensure the University is well-positioned for continued success in the decades to come. We have made a lot of progress but there is still so much work to be done. Our students and faculty deserve the very best and I'm committed to working in concert with all members of our community, including alumni, to ensure that our alma mater is the best that higher education has to offer."

A full biography of President Frederick can be found here.

Founded in 1867, Howard University is a private, research university that is comprised of 13 schools and colleges. Students pursue studies in more than 120 areas leading to undergraduate, graduate and professional degrees. The University operates with a commitment to Excellence in Truth and Service and has produced four Rhodes Scholars, nine Truman Scholars, two Marshall Scholars, one Schwarzman Scholar, over 60 Fulbright Scholars and 22 Pickering Fellows. Howard also produces more on-campus African-American Ph.D. recipients than any other university in the United States. For more information on Howard University, please visit www.howard.edu.