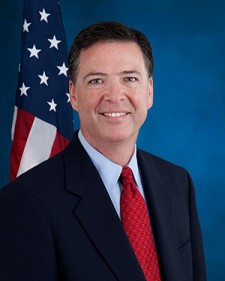 WASHINGTON, DC, August 23, 2017 (Newswire.com) - ​Howard University appoints James Comey as this year's Opening Convocation keynote speaker and the 2017-2018 Gwendolyn S. and Colbert I. King Endowed Chair in Public Policy. Mr. Comey will kick off the school year with an address to the University and engage the Howard community through a lecture series designed to foster fruitful discussion and spur meaningful interaction.

Scheduled for Sept. 22, 2017, Opening Convocation officially signals the beginning of the academic year. Mr. Comey will formally welcome the Class of 2021 to the 2017-2018 school year and recognize the University for its accomplishments and its commitment to excellence in truth and service. As the holder of the King Chair, Mr. Comey will lead and conduct five lectures featuring speakers that will touch on several topics.

I am honored to hold the King Chair this school year. Howard has a longstanding history of being a vibrant academic community and the perfect place to have rich dialogue on many of the most pressing issues we face today.

"I am pleased to welcome Mr. Comey to Howard," said Howard University President Wayne A.I. Frederick. "His expertise and understanding of the challenges we continue to face today will go a long way in sparking rich discussion and advancing meaningful debates across campus."

The King Chair was established to provide students access to experienced, senior public service executives who developed and advanced public policy initiatives. Mr. Comey will announce the topic of the lectures after consulting with student leaders and other campus stakeholders on topics relevant to the Howard community. Mr. Comey will be donating his entire King Chair compensation of $100,000 to a Howard University scholarship fund. The fund will support students coming from a foster home environment.

"Colby and I are delighted that a highly distinguished public official such as Jim Comey will become the holder of the Gwendolyn S. and Colbert I. King Endowed Chair in Public Policy for the coming academic year," said Gwen King. "Since the chair was established in 2008, five prominent public leaders have come on Howard's campus to engage students on issues related to the public interest, including an examination of the intricacies of policy making. Few in public life are better suited for this role than the experienced and esteemed Jim Comey."

James Comey is an attorney with a breadth of experience in private practice and the federal government. Mr. Comey served as the seventh Director of the Federal Bureau of Investigation (FBI) appointed by President Barack Obama. During his tenure at the FBI, Mr. Comey supported several programs across the organization that focused on diversity initiatives. In February, 2017, President Wayne A.I. Frederick was invited by Mr. Comey to address the FBI on the issue of "Success Through Education," emphasizing the critical role of HBCUs.

"I am honored to hold the King Chair this school year. Howard has a longstanding history of being a vibrant academic community and the perfect place to have rich dialogue on many of the most pressing issues we face today," said Comey. "I look forward to contributing to this remarkable institution and engaging students and faculty alike."

Prior to his service in the FBI, Mr. Comey worked as a federal prosecutor in New York and Virginia and as both the United States Attorney for the Southern District of New York and as the Deputy Attorney General of the United States. In the private sector, he has worked at law firms and as the General Counsel of Lockheed Martin, the world's largest defense contractor, and Bridgewater Associates, the world's largest hedge fund. Comey has been an adjunct professor at the University of Richmond Law School and immediately before becoming FBI Director was a Hertog Fellow in National Security Law at Columbia University Law School.

About the King Chair

The Gwendolyn S. and Colbert I. King Endowed Chair in Public Policy was established by government and business leader Gwendolyn S. King and her husband, Pulitzer Prize-winning columnist Colbert I. King. Established in 2008 with a $1 million donation from the Kings to Howard University, the chair is intended to encourage highly accomplished individuals to come to Howard and share their experiences with current students. The Kings, both Howard alumni, inaugurated the chair to reflect their years in public service and the media.

Founded in 1867, Howard University is a private, research university that is comprised of 13 schools and colleges. Students pursue studies in more than 120 areas leading to undergraduate, graduate and professional degrees. The University operates with a commitment to Excellence in Truth and Service and has produced four Rhodes Scholars, nine Truman Scholars, two Marshall Scholars, one Schwarzman Scholar, over 60 Fulbright Scholars and 22 Pickering Fellows. Howard also produces more on-campus African-American Ph.D. recipients than any other university in the United States. For more information on Howard University, please visit www.howard.edu.