Hey Texas, Have You Ridden YOUR Railroad Lately? 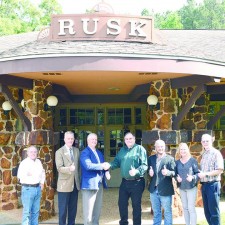 Palestine, Texas, May 19, 2017 (Newswire.com) - Traveling between Palestine and Rusk, the Texas State Railroad may only cover a 25-mile-long track, but it runs deep: a deep connection of pride, scenery, friendship, and history linking the two communities. On Thursday, May 4, 2017, The Western Group, an association of railroads headquartered in Ogden, Utah, took over the operation of the Official Railroad of Texas. Awarded the operating contract by the Texas State Railroad Authority due to their vast knowledge and experience in passenger and rail service, The Western Group is proud to expand into the Lone Star State.

“We don’t want to just be known as the new operator with new ideas,” commented Teresa Propeck, Vice President of Passenger Train Services, “but rather as the right operator with determination to give this railroad the exposure and recognition it deserves.”

One of Western Group’s affiliates is Verde Canyon Railroad, a successful excursion operation in the Verde Valley of Arizona, operating on a historic line built in 1912. Since 1990, Verde Canyon Railroad has built an award-winning foundation in tourism with this heritage rail line, and many of their successful methods and concepts will be implemented on the Texas line, ensuring its longevity and superiority as one of the nation’s esteemed rail experiences. “The bones of a great railroad are here,” says Propeck, “Our goal is to make Texans excited about their Official State Railroad when they come to ride.”

Dating back to 1884, inmates incarcerated in the East Texas Penitentiary in Rusk started to lay rails to transport fuel for the prison’s iron industry. By 1909, the railroad had reached its final destination of Palestine, 25 miles from where it began. Operating as a freight line until 1969, the railroad was turned over to the Texas Department of Parks and Wildlife through legislative enactment. With its historic locomotives, vintage rail cars and handsome heritage depots, the Texas State Railroad was christened anew as a tourist train, first welcoming passengers aboard on the date of the United States Bicentennial, July 4, 1976. Designated the “Official Railroad of Texas” by decree of the 78th Texas Legislature in 2003, the line was transferred to the Texas State Railroad Authority by the 80th Texas Legislature in 2006.

For the past 10 years, operators have focused heavily on special event trains. The goal of The Western Group is to build upon this foundation and bring even more passengers to ride through the picturesque Piney Woods. Some will come for the pure thrill and enjoyment of riding in antique rail cars, others to see the vintage steam and diesel engines, but all will be impressed by the railroad associates who pamper travelers from the first moment they arrive on property, through the unparalleled on-board service, to the last wave goodbye upon arrival back at the depot.

Food service and shopping options will be available at both Rusk and Palestine depots, as well as fascinating storyboards detailing the railroad’s and the region’s rich history. Rail fans nationwide recognize the significance of the Texas State Railroad’s celebrated rolling stock.

“The Texas State Railroad Authority has done an unbelievable job of making sure that these classic locomotives and passenger cars maintain historic authenticity,” commented Propeck, “and it is our goal to improve this railroad by adding more comforts and amenities expected by riders in the 21st century. We will still be operating trains for special occasions, including Polar Express, but we will be enhancing the experience for passengers each and every day.”

The Western Group plans to have improvements well underway by the middle of May and completed by mid-June, with the exception of the new rolling stock museum located in Palestine. “This project may take a little more time,” said Propeck, “but the ability to stand right next to these mammoth steam locomotives and tour a late-1890 wooden-frame presidential car in mint condition will be worth the wait.”

Original locomotive mechanical drawings will be incorporated into the exhibit with other museum-quality memorabilia. Included in the planned upgrades are coach car renovations, new interiors for cabooses and the makeover of unique parlor observation car #1511, which has seated Texas governors and U.S. presidents dating back to Lyndon Johnson.

A beautiful campground located on Lake Cherokee near Rusk is included in the improvement of the railroad facilities. This feature is a rare bonus as it’s a very special opportunity to camp overnight next to a historic railroad in the beautiful Piney Woods. Everything great about Texas State Railroad’s storied past will remain treasured, while new ideas on the horizon will bring this heritage railroad more passengers and enthusiasm than in past years.

The Western Group will also be working with the communities of Rusk and Palestine to aggressively market and develop rail freight opportunities along the line through its freight rail carrier, Texas & Eastern Railroad. “Texas & Eastern is uniquely positioned to help lower the cost of transportation for businesses in the area,” says Bruce Carswell, Senior Vice President of The Western Group. “The rail line already has available transload options and has developable rail-served property parcels available at multiple locations along the rail line.”