Gripbell the Most Versatile Fitness Equipment Launches February 2 on Kickstarter

Barxbell, LLC launches their Kickstarter campaign to begin the production and distribution of Gripbell while allowing their early supporters to make an advanced purchase at a reduced price before it is made available to the public. 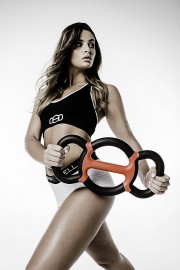 Pleasanton, California, February 2, 2016 (Newswire.com) - Barxbell, LLC launches their Kickstarter campaign to begin the production and distribution of Gripbell while allowing their early supporters to make an advanced purchase at a reduced price before it is made available to the public.

Gripbell is the world’s first innovative all-in-one piece of universal fitness weighted equipment that can support many exercises needed to challenge the body with more gripping areas. It has been used by Nyle DiMarco, America Next Top Model Cycle 22 winner, who is also highlighted in some of the company’s campaign.

Gripbell is designed to allow the user do more in their fitness routine comfortably and with confidence. From pros to amateurs of all ages, anyone in any stage of fitness can use Gripbell. There is no limit to what the Gripbell may be utilized for including stretching, physical therapy, strength exercises, yoga, dance, aquatics, oar-rowing routines, and more. Its design allows the user to easily exercise with the Gripbell indoors or outdoors, in water, at home and is convenient for traveling.

Gripbell has already been tested by those in the fitness industry. Pearlene Utley, a long time Beachbody Coach, and Aaron C. Wright, strength and conditioning coach at West London CrossFit, who had positive praised the versatility and ease of use of the Gripbell.

“The GripBell is an innovative, versatile piece of exercise equipment. It can be used in the place of a dumbbell and is also easier to handle while performing typical kettlebell exercises. It also allows for multiple hand positions not afforded with the dumbbell and kettlebell,” says Wright.

“From the first look and touch, I have been nuts over the Gripbells, which have been allowing me to be more comfortable and creative during my workouts! The functionality allows me a forever list of things to do including replacing some of my dumbbells and band exercises with Gripbells.” Says Pearlene Utley.

Similar to free weights, Gripbell provides unstable force which is the key to effective strength training. Unlike free weights though, Gripbell has a perfectly distributed weight so that the user can challenge themselves to a more intense routines without worrying about losing control of the weight. It is easy on the skin and hands. There is no direct contact with metal or hard materials, which reduces the chance of the equipment slipping from the user’s hands causing pain or injury.

The internal frame of Gripbell is made of recycled cast iron with the cores of the lightest two weights made of solid PVC. The exterior is a molded-over hypoallergenic polyurethane seamlessly allowing every inch of it to feel exactly the same. Each weight (3lb, 5lb, 8lb, 10lb and 12lb) is of the same physical size and shape allowing the user’s muscles to focus on becoming stronger rather than relearning and remastering every time the weight level is increased.

One of the most exciting features of the Kickstarter campaign is making Gripbell available to those who made advanced purchase at a reduced price. The campaign has structured a variety of pledge levels aimed at both individuals interested in staying fit at home and fitness businesses like Gyms and Crossfit organizations to utilize this innovative product with their clients to get even more out of their current workout routines. These reduced prices are only available during the Kickstarter campaign and quantities are limited so supporters are encouraged to lock in their pledges early.

To learn more about the campaign and lock in an advanced purchase visit Gripbell’s Kickstarter campaign.

GripBell is a Health & Fitness Products company based out of California. Gripbell, the World's First 3-in-1 Workout Equipment to Launch on Kickstarter. Gripbell is designed to let you do more fitness with more comfort.