Global Initiative reports that a humanitarian ceasefire was announced to take effect on Oct. 10, 12:00 local time by Armenia, Nagorno-Karabakh (Artsakh) and Azerbaijan. However, less than an hour after the effective time, Azerbaijan opened fire. 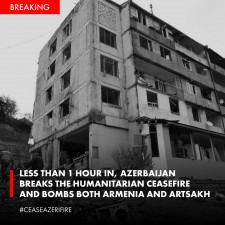 What's happening on the frontline of Nagorno-Karabakh (Artsakh)

According to BILD journalist Paul Ronzheimer reporting from Stepanakert, the Azerbaijani army is still shelling the capital of Nagorno-Karabakh (Artsakh), and fighting is still ongoing in the South. Other regions are relatively calm.