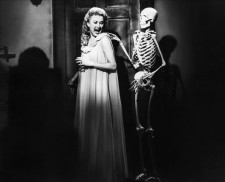 ROCKPORT, Mass., September 30, 2020 (Newswire.com) - The Film Detective (TFD), a classic media streaming network and film archive that restores and distributes classic films for today's cord-cutters is proud to announce the return of 31 Days of Horror. Every night at 10 p.m. ET in October, The Film Detective will feature a different classic scare from Lon Chaney’s The Phantom of the Opera (1925) to made-for-TV thrills like Dark Night of the Scarecrow (1981).

As part of the 31 Days of Horror, The Film Detective is proud to announce the arrival of Friday Fright, every Friday at 10 p.m. ET. Co-created by Greg and Gail Martin, this late-night classic features Ravena, the Goddess of Stonehenge and her faithful companion Anok presenting horror classics like Bela Lugosi’s White Zombie (1932).

Said Greg Martin, "We are ecstatic to partner with The Film Detective and bring you the classic Friday Fright show in October. We hope you will love Ravena, the Goddess of Stonehenge and her companion Anok as much as we do."

Accompanying Friday Fright throughout October will be a Trailers from Hell-oween Marathon on Oct. 31. Featuring directors Mary Lambert, Mick Garris, and “Trailers from Hell” founder Joe Dante, this 24-hour Halloween marathon includes exclusive commentary from some of Hollywood's most talented filmmakers in “Trailers from Hell” shorts — to be followed by the full films they discuss, including Carnival of Souls (1962) and Dementia 13 (1963).

Enthusiasts from horror to punk rock and even politics will enjoy upcoming additions on The Film Detective app. Punk rockers should mark their calendars for the Oct. 1 worldwide debut of Chaos! Sex Pistols, McLaren, Art & Dave Goodman: Director's Cut 2020. This stunning documentary about the rise of UK Punk and the Sex Pistols is a fascinating historical piece, featuring members of Sex Pistols, The Clash, Malcolm McLaren, and the Pistols’ first producer, Dave Goodman.

The Film Detective is a leading distributor of restored classic programming, including feature films, television, foreign imports, and documentaries. Launched in 2014, The Film Detective has distributed its extensive library of 3,000+ hours of film on DVD and Blu-ray and through platforms including TCM, EPIX, Amazon, and PBS. The Film Detective has released its classic movie app on web, Android, iOS, Roku, Amazon Fire TV, and Apple TV and is available live via Sling, STIRR, Plex, and DistroTV.