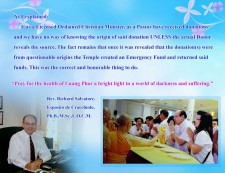 FORT LAUDERDALE, FL, June 13, 2016 (Newswire.com) - ​According to Freedom Watch International, Dhammakaya followers have launched a social media campaign in support of the embattled monk, Venerable Dhammajayo, the abbot of Wat Phra Dhammakaya. The abbot is accused by the Thai Department of Special Investigations (DSI) of money laundering and receiving stolen goods after he received donations that were later linked to an embezzlement scandal. The abbot admits receiving the donation but states he did not know the source, as he received them in the open public amongst a crowd of donors.

Supporters of the abbot from all over the world launched a campaign on social media to show solidarity with the abbot. The premise of the campaign is that the the abbot is innocent since it is considered inappropriate to question the source of people’s donations, nor is it required by law in Thailand and many other countries to question donations.

The accusations against Venerable Dhammajayo, also known as Phrathepyanmahamuni, started when the former chairman of Klongchan Credit Union Cooperative (KCUC) was alleged to have embezzled over 12 billion baht from the credit union. A portion of that amount was traced to donations made to the temple by the former chairman in the form of checks. The rest of the allegedly embezzled funds were traced to checks issued to several other organizations, including other temples.

When the donations to the temple were found out to be linked to the embezzlement accusations, supporters set up an emergency fund to return the equivalent of the funds to the credit union. The credit union subsequently thanked the supporters and dropped all charges. DSI is still pursuing the abbot on criminal charges.

DSI’s continued pursuit of Venerable Dhammajayo sparked a string of worldwide protests over the case, with supporters saying he has been wrongfully accused. The case also prompted a petition to the White House over DSI allegedly handling the investigation unethically.

The case intensified when an arrest warrant was issued after the abbot failed to appear for a summons. The temple did, however, send representatives to request that the location of the meeting be moved to the temple’s medical ward due to complications from the abbot’s medical conditions.

After negotiation, the temple agreed that the abbot would meet with DSI at Klong Luang Police Station near the temple to hear charges, as doctors warned going to DSI’s office in Bangkok would put the ailing abbot at risk for a fatal pulmonary embolism.

Venerable Dhammajayo suffered severe dizziness trying to get up to meet investigators, and the lawyer requested another 30 minutes for him to appear. He later fainted and was unable to make an appearance, prompting DSI to start planning for his possible arrest. The temple responded by filing an appeals to get the arrest warrant rescinded, and by submitting a request by the Medical Council of Thailand to send a specialist to verify the abbot’s condition, as DSI has turned down all requests by the temple to send their own doctor to verify that the abbot is truly ill.

Wat Phra Dhammakaya is no stranger to controversy. The temple has been dogged with criticism over the temple’s unorthodox approach to Buddhism for decades. The latest case has served as not just a legal battle, but also as a proxy war among long time Dhammakaya supporters and opponents.

The highly polarizing case has attracted numerous Dhammakaya critics to support the case. Controversial monk and political activist Buddha Issara has repeatedly urged investigators to speed up their pursuit of Venerable Dhammajayo and even called on DSI to impound the temple’s assets. However, the Thai Anti-Money Laundering Office has released a statement affirming this is not legally feasible.

Another famous Dhammakaya critic, Thai university professor Dr. Mano Laohavanich, who is known for his provocative remarks about the temple, has also gone public about the case. Dr. Mano called the abbot a flight risk on Thai television, claiming that the abbot had a “lifetime visa” to the United States. Temple officials denied Dr. Mano’s claim, as the United States does not currently have a lifetime visa and the abbot does not have a passport.

On the other end of the spectrum, the case has caught the attention of not just opponents and followers of Dhammakaya, but other groups as well. A group of 150 villagers[1] [2]  from Tambon Klong Sam subdistrict held a “Somtham” (papaya salad) party at one of the temple gates in support of the abbot in the case. While not followers, they stated they support the abbot out of gratitude for the temple’s aid during the 2011 Thai floods.

"We are here because we are thankful for the temple's help during the 2011 floods," said villager Wassana Cheeva-osot.

"So, we cannot stand idly by. From what we see in the media, we feel Phra Dhammajayo and his temple are not being treated fairly."

The villagers also used their own construction equipment to block some gates to the temple to ensure its safety. These have since been removed.

Aside from the global picketing, Dhammakaya followers’ main response to the case has been on social media, with the current campaign focusing on the charge for receiving tainted public donations.