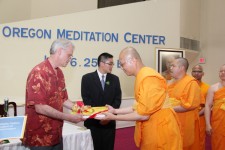 Venerable Dhammajayo is being charged for money laundering and receiving stolen property after donations he received from 2009-2011 were alleged to be linked to an embezzlement scandal. The abbot states he did receive the donations but did not know where they came from as donations made are received in the open public.

Attendees also brought the attention of the White House petition to the Congressman, which has now exceeded its target of 100,000 signatures. The petition was started after the Thai Department of Special Investigation (DSI) was granted an arrest warrant for the abbot after he failed to appear for a summons. The abbot sent representatives to request the location of the hearing be moved to the temple a few days prior to the summons due to complications from his medical conditions. As doctors have stated, travelling to DSI’s office in Bangkok would put him at risk for a fatal pulmonary embolism. DSI refused this request.

“Because DSI has ignored the rights of ill defendants for reasonable accommodation, we believe the DSI has acted unlawfully and in gross violation of patient and human rights.” reads the petition.

A US Army Veteran also shared his struggle with PTSD after being deployed in Afghanistan in a public speech to the Congressman. He discussed how meditation helped him during his treatments and how he founded a group called “Meditation for PTSD Military” to help other veterans with similar problems during the visit.

The United States Congressman has agreed to submit the petition and the details about the case to US Secretary of State John Kerry to look into the actions and methods of DSI.