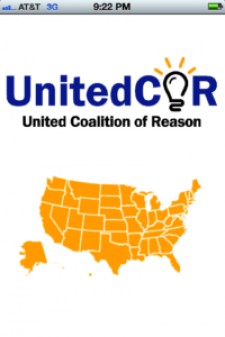 Washington, DC, March 21, 2017 (Newswire.com) - The United Coalition of Reason (UnitedCoR) —headquartered in Washington, DC— is excited to announce that it has successfully launched the first completely free mobile app that is designed to help individual non-believers (atheist, agnostic, skeptic, Humanist, freethinker), non-religious and secular-friendly people find others of similar interest and sincerely-held beliefs. The app is designed to help people worldwide connect with others of similar interests, and find local organizations that support their point of view.

The first function of the mobile app, for Android and iOS phones, automatically draws updates from thousands of secular calendar web pages, without the burden of data entry. Users can swiftly email calendar events to themselves or to a friend, get more information about groups hosting events, and add an event to their smartphone calendar. Links to download the secular app for both Google Play and Apples iTunes can be found on the UnitedCoR website: http://unitedcor.org/app/.

This outreach is the latest effort in a campaign that began in 2009 for the purpose of bringing together the many non-religious individuals and groups that have heretofore been unconnected. Some of UnitedCoR’s prior campaigns have included highway and bus billboards in over 40 states and Canada.

United Coalition of Reason's Communications Director, Susann Heap, stated, "We created the UnitedCoR app to provide a centralized location for our current and prospective new members, along with the national organizations that want to work together to advance the interests of non-believers worldwide. As the app grows and evolves, we will develop new applications that will be to the benefit of non-religious communities, as well as secular-friendly organizations.”

The United Coalition of Reason (www.UnitedCoR.org) works to raise the visibility and sense of unity among local groups in the community of reason by providing expertise and resources to help them cooperate toward the goal of raising their public outreach.

About United Coalition of Reason

Founded in 2009, the United Coalition of Reason is one of the largest nontheist organizations in North America—and quickly growing internationally—a coordinating place for hundreds of independently run local groups, each a little different.

Iowa Humanists and Atheists Hold "Reason on the Hill" and Call for the Inclusion of All Iowans
United Coalition of Reason - Apr 18, 2017
Newswire