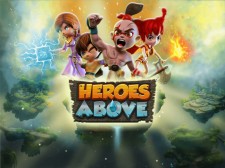 "FredBear Games Ltd & PlayPlayFun are more than excited to partner up with such an outstanding and creative development studio, Unlibox to bring Heroes Above – Sky Clash to the iOS App Store," said Clive Bennett of FredBear Games Ltd.

Unlibox team and their game, Heroes Above, have been winning accolades from both Casual Connect and IMGA SEA. It has been an honour for us to be able to work together with such talented people.

"Unlibox team and their game, Heroes Above, have been winning accolades from both Casual Connect and IMGA SEA. It has been an honour for us to be able to work together with such talented people and we look for a long and successful partnership," said Budhi Tantra of PlayPlayFun.

To celebrate the launch of the upcoming iOS version of Heroes Above, FredBear Games, PlayPlayFun and Unlibox are offering players 500 FREE GEMS in the form of in-game currency during global launch provided that players pre-register through the following link: https://goo.gl/2GJ1tU

Heroes Above is a real time strategy game that combines resource management, RPG and a tower defense element. Some players draw comparison between Heroes Above and other high profile games such as Clash Royale and Plants vs. Zombies.

As Captain of your very own Sky Ship, scout and train your crew of Heroes to defend your home! Summon raging barbarians, explosive fire mages, even dead-eye gunners - over hundreds of unique play styles to choose from!

Players must train and evolve their heroes to create the perfect fighting squad. Then, board enemy ships to begin the onslaught. Choose your squad carefully and select the right ship to fly to give the extra edge in battle.

ATTACK ONLINE, DEFEND OFFLINE! Never worry about getting disconnected during a match! Players setup their defensive Heroes before going to battle!

BUILD A UNIQUE CREW: Scout, Train and Evolve your Heroes to gain the upper hand against your opponent! Use Ship Skills to turn the tide of battle!

WATCH, LEARN AND GET REVENGE! Watch replays of your defense and launch a counterattack on your opponents!

AND CONQUER THE SKIES: Gain Prestige and rise to the top of the Leaderboard. Do you have what it takes to be among the Heroes Above?

'Welcome Runeseeker. Are You Ready for an Adventure?' 'Gwent' Like Runewards CCG Looking for iOS Beta Testers
This high production values collectible strategy card game will be free to play, and has a full ranking and league system ready to go global
FredBear Games Ltd - Oct 10, 2017