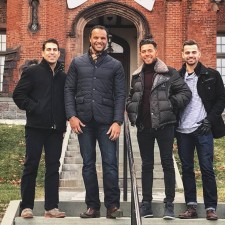 Gerard Adams, FOWNDERS’ founder and CVO made headlines in 2016 with a TEDx talk at New Jersey Institute of Technology that featured FOWNDERS’ mission. The FOWNDERS’ team also represented thoroughly at Newark, New Jersey’s Fiber ribbon-cutting ceremony with Mayor Ras Baraka that staked Newark’s claim as having the highest speed commercially available internet east of the Mississippi. Adams said: “2016 was foundational with culture building, team building and collaborations with NJIT and Medina’s =Space incubator. Newark’s future looks bright and Stephen Bienko’s addition to the team as CEO signals that we’re ready for growth in 2017.” Bienko is formerly the largest franchisee of the College Hunks Hauling Junk and Moving brand with offices in New Jersey, Tennessee, Ohio and Florida.

Bienko said of his appointment as CEO that “I’m thrilled to serve such a fantastic team and work alongside one of the most visionary and inspirational Millennials.” Gerard Adams, FOWNDERS’s CVO, was a millionaire before age 24 and cofounded and sold “Voice of Generation Y” publication Elite Daily for $50 million in 2015. His team has the Leaders Create Leaders YouTube series and a major network-television show on entrepreneurship in the works.

FOWNDERS is the Newark, New Jersey-based social-impact start up accelerator that advances entrepreneurship, technology and innovation in urban communities. It facilitates economic development through Business Acceleration--a 12-week immersive curriculum--and personal development and civic improvement initiatives. Pioneering a new type of social enterprise FOWNDERS provides lasting impact on our world by allowing others to align passion with purpose and take action on making their dreams a reality.