LAKEWOOD, N.J., November 2, 2017 (Newswire.com) - Flybar, Inc., the fast-growing sporting toys company, today, officially launched the ipogo jr., the first pogo stick that not only counts jumps and lights up but also talks, motivating kids to keep jumping. The ipogo jr. is the latest innovation from Flybar, the Original Pogo Stick Company, since 1918.

“The ipogo jr. has been in the works for some time and we are so excited to finally get it into kid’s hands. The initial response has been so positive and we are happy to be attracting a new young generation of pogoers,” said Stalyn Freile, Director of Marketing at Flybar, Inc.

With Flybar’s 100-year anniversary approaching in 2018, the ipogo jr. has brought pogo sticks into the 21st century. The ipogo jr. is ergonomically designed for kids aged 5-plus (max. weight of 80 lbs.). When the power button on the console is turned on, ipogo jr. introduces itself and readies itself for pogo fun.  The ipogo jr. will also count jumps, and offer encouragement. The patented light board tracks the jumps as well. The ipogo jr. will announce when key milestones are achieved on the way to becoming a “Record Breaker Flybar Champion” at 999 jumps!

“I have to thank the design, engineering, and supplier teams for collaborating on the ipogo jr. It couldn’t happen without that global partnership. I also have to thank the retail partners who gave us invaluable feedback throughout the development process,” said Saul Wolhendler, Flybar, Inc., President and CEO. “We pride ourselves on innovation and collaboration and we are excited about the ipogo jr, and the other new projects Flybar is bringing to retail.”

The ipogo jr. is available now. It comes in Blue and Pink and requires three AAA batteries. Like all Flybar Pogo Sticks, it was designed with safety and fun in mind. Comfort hand grips, stable foot pads, and a wide bounce tip are essentials for any pogo and the ipogo jr. has them all. After all, it is not just a pogo stick, it’s a Flybar.

In 1918, toy inventor George B. Hansburg introduced America to the pogo stick and opened the original pogo stick company. In the early 1920s, Hansburg brought his pogo stick to his friend, Florenz Ziegfeld of the world-famous Ziegfeld Follies. Ziegfeld, the eminent Broadway impresario of the day, immediately choreographed a pogo routine into his show. The Follies made pogo sticking the latest craze. Hansburg made the pogo stick his passion and continued innovating pogos. To revitalize the pogo craze, Hansburg set out to reinvent the quality, durability, and fun of the pogo stick. His 1957 Patent for the “MASTER” pogo stick, shows the now iconic curved handle and dual supporting bars. In the late 50s and early 60s, Hansburg did indeed recreate that pogo craze with the “MASTER” pogo stick.

Hansburg’s original pogo stick company changed hands in the 70s but its new owner was equally committed and passionate about pogo sticks. They persistently tried to improve on the basic pogo stick. It was this quest, for a pogo that could elevate riders to new heights, that ultimately lead to the development of the Flybar in 2000. The Flybar used patented technology of Elastomeric Thrusters. These thick natural rubber thruster bars could be selectively engaged to create the right bounce based on weight and ability. The Flybar created a comfortable BIG bounce that replicated the feel of a trampoline. But, what the Flybar really created was the extreme pogo sport, and pogoing never looked quite the same again.

We are still passionate about pogos after 99 years, and are proud that Flybar pogos are “the standard by which all pogos are measured”. From innovating the extreme pogo, introducing pogo interactivity, to continuously supporting pogo sports and pogo health all around the globe, Flybar continues to be the world’s leading pogo stick company. But Flybar today is not just pogos. New products for toddlers, stilts, gear, trick boards, swings and skateboards are all designed and developed with the passion and innovation George Hansburg first demonstrated nearly 100 years ago. 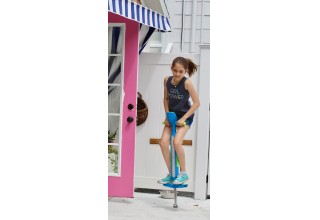 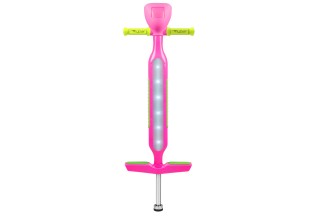 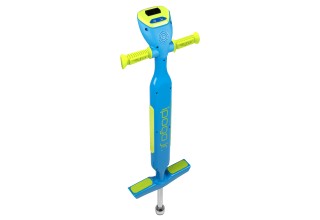