Fantagio to Host Its First Music Hackathon Starting April 25 for Its Upcoming Global Launch of an NFT Meta Idol, Composers Around the World Can Participate as Contestants 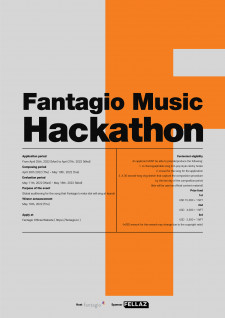 SINGAPORE, April 20, 2022 (Newswire.com) - Fantagio, a KOSDAQ-listed South Korean entertainment powerhouse, announced its plans to host Fantagio Music Hackathon, a global audition for aspiring composers all around the world to have their song selected for the upcoming NFT meta idol to sing at launch. Anyone can participate as a contestant regardless of their nationality, credentials, gender or age.

Fantagio Music Hackathon plans to offer a prize fund totaling $21,500 along with either an exclusive-tier NFT or an original NFT from the NFT collectibles to be launched by Fantagio. The reward will be given to the top three contestants in varying amounts and NFT combinations, with further detail on the prize to be announced shortly. In addition, the winning song will be released as the first song for Fantagio's upcoming meta idol.

The first NFT collection Fantagio and Fellaz plan to launch in collaboration is "meta idol characters." The first song that Fantagio's NFT meta idol will launch will be the winning song from Fantagio Music Hackathon.

Contestants can apply to Fantagio Music Hackathon on Fantagio's official website from April 25-27. The selection process will begin immediately after.

Fantagio, as a comprehensive contents company, engages in artist management, music album production, and drama production. The most prominent actors and musicians include Ong Seong-wu and Im Hyun-seong, as well as idol groups such as Astro and Weki Meki. Recently, it is actively growing its influence in the K-drama market through the new drama "Blind," which will air on OCN.

Fantagio Announced on the 28th That It Has Successfully Ended the Recruitment for Its First Music Hackathon
Star X Ventures - May 1, 2022