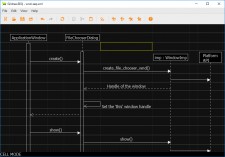 Tochigi, Japan, August 30, 2016 (Newswire.com) - ​​​​​Gridraw Inc. – Utsunomiya Tochigi, Japan – has updated Gridraw, the UML drawing tool that features innovative usability and lightweight performance. The Gridraw software product is supported by Windows platforms and can be downloaded from our web site. Gridraw is capable of changing the magnification (zoom in / zoom out / same / entire display) using the keyboard. The operability of editing while in zoom mode is substantially improved. The zoom function provides an enlarged display to support screen sharing among multiple users as well as a reduced display for viewing the entire image when it is necessary to explain and share information with other users. Gridraw also improves ease of use by supporting sharing of screen images among teams. Published videos are available on our web site to introduce the convenient use of the zooming features included within this release.

How is zooming used?

The typical use of the zoom feature is to describe or display the edit screen to others in a group or meeting. For example, when one projects the edit screen using a projector, the display may be too small because of the magnification setting. Even if the screen size is optimal to support an individual edit, it may not be sufficiently large to share the screen with other users. In this case, the display is easily enlarged to accommodate all users by use of the zooming function.

However, if one uses the screen sharing function in an online meeting, the screen resolution is occasionally limited. In this case, reducing the size of the display will result in an image that will provide an entire image that is much easier to view.

Support for “what you see” edit while in zoom mode

A significant feature of the zooming feature is the preservation of the image viewed by the user, whether it is small or large. Other editing tools require the user to edit in a second window that remains at the original (non-zoomed) size.i Hence, editing an enlarged diagram is performed not on the enlarged (zoomed) image but rather in a window of the original size.

A significant feature of Gridraw allows the user to edit the zoomed diagrams directly on a larger magnified image. Thus Gridraw will retain the WYSIWYG(*) property in any zoomed or non-zoomed state. Clearly, this will enhance ease of use and the editing changes made by all users will be easily visible to all. That is, maintaining the zooming magnification simplifies the editing process and facilitates the shared editing process.

(*) WYSIWYG: “what you see is what you get” refer to Wikipedia

Engineers often feel that designing software is a troublesome task. This sentiment is reinforced by a belief – arising from the notion of an agile process – that what is most important is the runnable (executable) artifact. This erroneous interpretation of what is meant by an “agile” process mistakenly relegates design to a secondary, less important level. In response, Gridraw offers engineers comfortable usability, challenging the notion that software design is a burdensome chore. Gridraw improves the quality and speed of design and enables the user to quickly visualize the design, even in a pressurized environment requiring agile development. It enables sharing, consensus building, and verification of the design, enhancing the overall quality of the product.

In order to maximize usability, Gridraw has adopted an innovative new UI, using a cell system similar to a spreadsheet. We provide a comfortable design tool featuring a real-time automatic layout capability, full operability from the keyboard, and a system that is simple and lightweight.

We are developing Gridraw series.
Gridraw offers comfortable usability for software engineers and improves the quality and speed of the design.

Gridraw Improves the Speed of Drawing UML
Gridraw, the lightweight UML editor, has been updated. The addition of 42 key assignments significantly improves its performance and ease of use.
Gridraw Inc. - Jul 8, 2016