Elvira - Mistress of the Dark, Introduces the Next "Monster Mash" Song

Elvira - Mistress of The Dark, the worlds most iconic and famous Halloween and horror legend introduced what is being called the next "Monster Mash" song to the international community that celebrates the holiday. "Creature at The Bates Motel," written and recorded by Brian Evans, and produced by Grammy Award winner Gary Anderson was followed by a music video filmed entirely at The Bates Motel, the legendary filming lot of the Alfred Hitchcock thrilled, "Psycho." 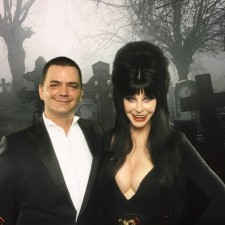 HOLLYWOOD, CALIFORNIA, August 10, 2016 (Newswire.com) - ​​​​​​​​​Elvira - Mistress of The Dark, the worlds most iconic and famous Halloween and horror legend introduced what is being called the next "Monster Mash" song to the international community.

"Creature at The Bates Motel," written and recorded by Brian Evans, and produced by Grammy Award winner Gary Anderson was followed by a music video filmed entirely at The Bates Motel, the legendary filming lot of the Alfred Hitchcock thrilled, "Psycho."

Comedian Carrot Top appears in the music video with Evans. The two are now working with Dan O'Leary, Carrot Top's manager, to create a new TV series inspired by the song. "The show will be a modern take on "The Twilight Zone" series," says Evans. "I'm involving those closest to me to be involved in the project."

"Brian's song is fun, family friendly, and it is the first new Halloween song in decades to hit the market," says the famous comedian, who headlines at The Luxor. "I knew when Brian let me hear this song, that something special was occurring. It's why I agreed to be a part of this video. It's true legacy," the comedian goes on to add.

The song was debuted at Scare LA (scarela.com), one of the largest horror and Halloween conventions in the world, hosted by Elvira. Evans also performed to thousands at The Pasadena Civic Center, during the event.

"When Elvira is hosting the Halloween event, it's as big and legit as it gets. She is a true icon and I can never thank her enough," says Evans. "She is helping to put the song on the map, worldwide."

With more than fifty countries that celebrate Halloween, the song was a clever idea. In addition to Evans promoting the song, he also had various discussions regarding his books, "Horrorscope," (co-written by Helen Marie Bousquet and Mark Andrew Biltz) "Savannah," (co-written with Ted Hamby and Kainoa Jacinto) "Shark," (co-written with Dan O'Leary and Cameron Walker) and other horror related books. His book "The Funny Robbers," co-written with Carrot Top manager Dan O'Leary, is being groomed to be a movie.

Scare LA, in addition to bringing horror families together, also brings exhibitors seeking to licensing products for American and international audiences. "Creature," and Evans' books were a part of those discussions held by Evans and Carrot Top.

Brian is also recording a brand new album to be produced by Gary Anderson, and is partial patent holder in a vocalizer that gives a voice to the deaf, giving those who utilize sign language a way to communicate to those who do not understand sign language. He also produced the wildly popular "Maui Celebrity Series." Actor William Shatner performs with Evans on December 30th, and singer Belinda Carlisle is scheduled for concerts with the singer on March 11th, both on Maui, where Evans resides.

Evans began his career as the opening act for Joan Rivers, Jay Leno, Franki Valli, Social Distortion, Lou Rawls, and the list goes on. His music video "At Fenway," with William Shatner, has received close to 12 million views on YouTube. He also recently filmed a music video of his cover of Dolly Parton's classic, "Here You Come Again," which again co-starred William Shatner, and also Dog The Bounty Hunter and comedian Paul Rodriguez. Evans intends to film his next music video, "This Town," in Las Vegas.

Oscar winning actor Jeff Bridges and Brian Evans also teamed up to bring awareness to Sleep Apnea, a condition dear to Mr. Evans, who lost his mother Helen in 2012 from the condition. Evans' music is also used on "So You Think You Can Dance," and the Netflix hit, "BoJack Horseman." He has performed thousands of shows in Las Vegas. A day was named for Evans in Las Vegas in a Proclamation awarded by the state for his work in Sin City. New Las Vegas appearances are in the works.

"Filming the music video at The Bates Motel was a concept created by me, and my co-producers Evan LaRochelle and Mark Andrew Biltz. Carrot Top loved the idea immediately."

"Everyone wants that one song, and while I have a lot of songs to bring to the world, I feel "At Fenway" and "Creature at The Bates Motel" will be my most significant contributions no matter what I do from herein, because they are both true legacy for all who were involved." Governor Brian Sandoval and Mayor Eric Garcetti recently issued Proclamations to Evans, LaRochelle, Biltz, and Carrot Top for accomplishing the music video for the historic accomplishment.

The song is being distributed worldwide. It is in negotiations to be included in various horror film and TV shows, as well as it's implementation in toys, video games, and greeting cards among other items. The TV show, obviously the biggest development to come from the series, will see it's first episode film on Maui and Las Vegas.

"Creature at The Bates Motel is the new Halloween song," says Carrot Top.