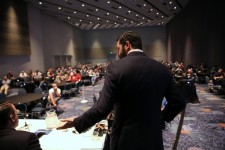 Hosted by Learning Machine CEO, Chris Jagers, the panel brought together research from the MIT Media Lab (Principal Engineer Kim Duffy), real-world perspective from the Registrar of Carnegie Mellon University (John Papinchak), implementation details from Learning Machine leadership (COO Dan Hughes), and the societal implications of distributed technologies (Learning Machine Anthropologist Natalie Smolenski). The panelists described a future in which learners are able to act as their own lifelong registrars.

The promise is that blockchain credentials will enable students to hold and share their own official records directly with others in a manner that is safe, tamper-proof, and trusted. We're talking about degrees, transcripts, certifications, badges--everything.

Chris Jagers began the discussion by acknowledging the uncharacteristic interest in this new technology from universities worldwide: "There’s been a lot of genuine excitement about using the blockchain within higher education because the promise is immense. The promise is that it will enable students to hold and share their own official records directly with others in a manner that is safe, tamper-proof, and trusted. We’re talking about degrees, transcripts, certifications, badges--everything."

The audience, composed of university CIOs, deans, registrars, and software vendors, raised the question of who should be the steward of student information. John Papinchak, Registrar of Carnegie Mellon University, replied that while registrars would undoubtedly continue in their role as issuers and custodians of student achievement, "students should own their records."

The conviction that the credential is a form of social currency earned by learners and theirs to use and share as they see fit was referenced by Natalie Smolenski, Cultural Anthropologist at Learning Machine. "One could ask who truly owns currency, the issuing body or the individual making use of what is issued? Of course, both parties are necessary to verify that the currency being transacted is what it is claimed to be. Beyond that, however, individual ownership of their resources is a premise for social empowerment, particularly in a rapidly-shrinking world with unprecedented labor mobility."

This event was the first public conversation about the Blockcerts technical standard for issuing and verifying academic credentials on the blockchain. The standard is freely available to be used by any school, vendor, or researcher.