Dr. Chris LaVoie Has Been Recognized Among the Top in His Industry by the Expert Network©

WETHERSFIELD, Conn., October 3, 2017 (Newswire.com) - Chris LaVoie, Founder, Family Chiropractic of Wethersfield, has joined The Expert Network©, an invitation-only service for distinguished professionals. Dr. LaVoie has been chosen as a Distinguished Chiropractor™ based on peer reviews and ratings, numerous recognitions, and accomplishments achieved throughout his career.

"I suffered from headaches in high school and college. It got to the point where it was affecting my academics, and a friend of mine introduced me to chiropractic. After having borne the pain for three and a half years, within two months my headaches were completely cured by chiropractors. That had such a dramatic impact on my life that I decided I’d change my path."

As a thought-leader in his specialty, Dr. LaVoie pays close attention to the changing trends in chiropractic care. Recently, he has witnessed several truly breakthrough advances in technology and he is eager for his patients to benefit from them. His adoption of these technologies early in their development has set him apart from his fellow chiropractors and has contributed to his prominence in the field. Dr. LaVoie describes the use of one such procedure, digital motion X-rays, which allow him to pinpoint exactly where the alignment problems are:

"We’ve incorporated digital X-rays and now extreme motion studies, which I would estimate only about five percent of chiropractors are doing right now. We can look at the X-rays and see where the bones are when a patient is standing up, and the motion study takes it to the next level. Now we’re actually seeing—when the patient bends or twists or puts their head up or down—which bones are moving relative to the bones nearby, and which ones are stuck. So we can get much more detailed and hone in on the defect motion restriction that’s causing the problem." 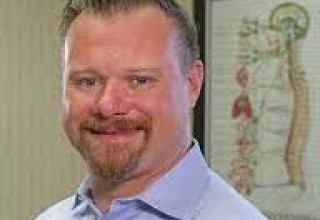