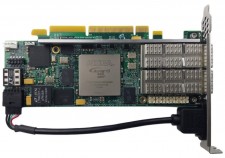 The DNPCIE_80G_A10 is a half-height PCIe board with a single Arria-10 FPGA, three banks of DDR4 memory, and a single bank of QDRII+ memory.

We made this new Arria-10 board as fast and as versatile as possible. It is perfectly suited for cluster deployment in co-location spaces or exchanges. Network applications and High Frequency/Low Latency Algorithmic Trading can enjoy line speed communications and packet processing with this little jewel.

The DNPCIE_80G_A10_LL supports three independent DDR4 banks each of 4GB in size.  Each bank is PC2400 with a 1024M x 32 configuration.  For data lookup that requires absolute minimum latency, the DNPCIE_80G_A10_LL hosts a QDRII+ memory structured as 4Mx18.