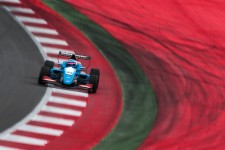 SPIELBERG, AUSTRIA, July 18, 2016 (Newswire.com) - Max Defourny secured two podium finishes in a thrilling battle at the fourth round of the Formula Renault 2.0 Eurocup championship at the Red Bull Ring to stay second in the title standings.

It has been a close battle since the season opener in April between the Belgian driver and Lando Norris, where Max took the first victory of the season for the R-ace GP team. Last weekend marked Max’s first time at the Austrian track this year during what will be an extensive tour of Europe through both his FR2.0 Eurocup and NEC campaigns.

It was a strong start to proceedings for Max who was P4 and P2 in FP1 and FP2 respectively. His fastest time on Friday, set in afternoon running, was a 1m 28.681s, just +0.066s behind rival Jehan Daruvala. The summer conditions on Friday were reflected throughout the weekend and gave one less obstacle to face when qualifying began on Saturday morning.

Two yellow flags disrupted Max’s progress for Q1 and cut short his fastest attempts over the twists and turns of the Red Bull Ring. In spite of this, Max’s pace remained strong to secure him third on the grid behind Daruvala in P2 and the championship leader, Lando Norris, on pole. Max’s #33 car was just +0.333s behind Norris, a representation of the closely fought battle to come.

Race 1 was undoubtedly the highlight of the championship this year which saw its competitors engaged in a tussle for the win and podium bragging rights. Max enjoyed a swift start at the lights to immediately remove any pressure from Harrison Scott behind and by the end of Turn 1, he had made swift work of overtaking Daruvala. These confident manoeuvres ensured Max second place for much of the 18-lap competition and signalled the start of his race-long battle with Norris.

Over the following 10 laps, Max would continually close the gap on the Josef Kaufmann car of Norris in front. Using clear air to his advantage, the deficit dropped by several tenths-of-a-second per lap as the hunt for the win continued. With the gap down to +0.2 seconds, Max started what would become two lead changes in one lap as the tussle for positions continued. Max often attempted some late braking manoeuvres while at the helm of his R-ace GP model in the hopes of catching the Brit in front.

One particularly significant move on Norris occurred with less than two laps remaining when Max overtook the championship leader at Turn 3 in an assured dash for P1. However, a late move from Norris – combined with the ever-improving pace of Ferdinand Habsburg behind which forced him to defend his position – ensured that Max greeted the chequered flag in second place, +0.890s behind eventual winner Norris. In what was a confident and mature performance from the teenager, Max walked away with 18 points from his first foray of the weekend. Crucially for the championship, title rival Dorian Boccolacci fell down the order for tenth, hereby reducing the reducing the points gap between the two racers.

After his thrilling battle with Norris on Saturday, Max returned to the track the following day with confidence in his car’s pace over both one lap and throughout the race. Initially, it looked as though Max would secure pole position but yellow flags once again halted his progress, causing him to lose some heat and grip in his new set of tyres. With that in mind, the teenager again lined up P3 on the grid.

Competing in clear and dry conditions, Max held off a fast-starting Will Palmer on the first lap and allowed Max to once again battle Norris up ahead – this time for P2. The Belgian confidently overtook Norris with 16 minutes and one lap left on the clock, this time making the move on the Briton stick. Fastest lap after fastest lap followed as Max charged round the Red Bull Ring to hunt down Sunday’s pole-sitter Harrison Scott.

The gap between the two drivers quickly plummeted thanks to Max’s rapid pace in his R-ace GP challenger. First +2.0 seconds, then +1.321s, and then +0.7s with two laps remaining, Max was testing Scott without relenting. In the end, the deficit reduced to as low as +0.4s but was not enough for Max to snatch the lead in the final moments, forcing the 2015 FR2.0 NEC rookie champion to settle for P2 at the close of Friday running and acquiring another 18-point haul.

“Everything was very close on Friday and that continued throughout the weekend,” said Max post-weekend. “One more lap in Race 2 and I would have attempted an overtake on Harrison into Turn 2. Overall, we need to be confident by our pace this weekend.”

Max will return to the track later this month when he continues his FR2.0 NEC campaign on home turf at Spa-Francorchamps. Unsurprisingly, his favourite track on this year’s calendar, Max will enter the weekend third in the championship and just nine points behind current leader Boccolacci.

“There is no added pressure at Spa,” he continued, “I am happy to be there as it is a circuit I like a lot and I have won there before in NEC.”

Spa-Francorchamps will host the fourth NEC round in conjunction with the Blancpain GT Series and the Spa 24 Hours from 28 – 30 July.