Recent release 'Jesus Colony' from Covenant Books author Darrell Hutchinson is an intriguing story about a futuristic lunar colony founded in Christ's name by a pastor that spirals into chaos due to greed and misguidance. 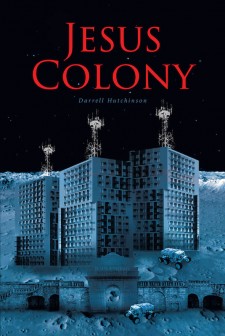 GOODYEAR, Ariz., August 14, 2020 (Newswire.com) - Darrell Hutchinson, a passionate Christian writer, has completed his new book “Jesus Colony”: an electrifying tale of corruption and deviance within Jesus Colony, a lunar community birthed by a pastor who claimed visions of God’s mandate for a land of righteousness.

Darrell writes, “Pastor Leonard J. Buchanan Sr., affectionately known as Pastor Buck, was a high-spirited minister with unconventional aspirations. One night in 2036, he dreamed he was the leader of a group of Christians who had colonized the moon to create a sin-free environment. After he awoke, he believed God had directed him to fulfill the dream and create a land of righteousness. Next, he faced a host of challenges in his effort to raise tens of millions of dollars for the unprecedented project. Although there was much skepticism within the Christian community, he successfully pitched the idea to a global audience and was eventually able to secure the necessary funding to make his dream a reality. Pastor Buck’s reputation and credibility was now on the line as he pursued this once-in-a-lifetime opportunity to bring the kingdom of heaven down to the surface of the moon.

Pastor Buck coordinated with the National Cosmic Administration and the Lunar Land Management Bureau to transport five hundred church members to the newly constructed Jesus Colony! Initially, everything was fantastic as colonists described their conditions as being second only to heaven. However, within months, policies were established to achieve and maintain an acceptable level of righteousness. Ultimately, their natural pursuit of righteousness led to intimidation, strife, and fear. Lunar Crime Enforcement agents began to investigate Jesus Colony when family members on earth notified members of Congress about disturbing and criminal allegations against Pastor Buck. Now under pressure, Pastor Buck did everything within his power to maintain ultimate control of the colonists as his dream faded before his eyes.  Afterward, a series of unimaginable events transpired which placed Jesus Colony under further intense scrutiny. Finally, the self-righteous decisions of Pastor Buck forever changed his family, congregation, and the bewildered colonists.”

Published by Covenant Books of Murrells Inlet, South Carolina, Darrell Hutchinson’s new book is a compelling depiction of the debauchery prevalent in religious settings when people are overwhelmed with power that ultimately breeds apathy and wickedness.

Readers can purchase “Jesus Colony” at bookstores everywhere or online at the Apple iTunes store, Amazon, or Barnes and Noble.

K. G. Hanson's New Book 'The Vast Land Unknown' is a Riveting Story of a Man's Extraordinary Venture Into the Vast Expanse Away From the Known World
Recent release 'The Vast Land Unknown' from Covenant Books author K. G. Hanson is a gripping narrative about a man who goes to the wilderness away from human civilization to find his life's purpose.
Covenant Books - Sep 16, 2020

Virginia Mohler's New Book 'Brian Learns to Play Ball' is a Profound Children's Story That Shows the Beauty of Family and Love That Comforts the Heart of a Lost Child
Recent release 'Brian Learns to Play Ball' from Covenant Books author Virginia Mohler follows Mrs. Miller's wonderful life as she and her family grants a student's Christmas wish and make him feel loved and cared.
Covenant Books - Sep 16, 2020

Ellen Pierre Louis' New Book 'Sweet Surrender' Unravels a Thrilling Pursuit for One's Dreams in Response to God's Plans for Her
Recent release 'Sweet Surrender' from Covenant Books author Ellen Pierre Louis follows the adventurous travels of Ellen, an Ontario country girl, who took one step of faith and flew to Haiti on her own where she experienced a life full of love, ministry and perseverance
Covenant Books - Sep 16, 2020
Newswire