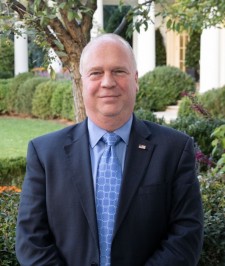 HERNDON, Va., May 7, 2019 (Newswire.com) - HawkEye 360 Inc., the first commercial company to use formation flying satellites to create a new class of radio frequency (RF) data analytics, today announced that Chris Herndon has joined the company as chief information officer. Herndon brings more than 30 years of experience in building advanced information technology systems. Most recently, Herndon served in the Trump Administration as the White House Deputy Assistant to the President and the Director of White House Information Technology, where he created the White House IT strategic plan and transformed enterprise services across all twelve components of the Executive Office of the President.

“Throughout his career, Chris has built an impressive portfolio of secure IT solutions and has broad knowledge of federal policies and best practices,” said HawkEye 360 Chief Executive Officer John Serafini. “Chris’s expertise in cybersecurity will reinforce HawkEye 360’s commitment to high standards for data security. His leadership in the field fills an important role in the team.”

As CIO of HawkEye 360, Herndon plans to make data security his top priority. With an end-to-end approach to security, Herndon will protect HawkEye 360’s business operations and network while safeguarding the data generated by the HawkEye Constellation, so that customers may trust that the RF analytics are authentic and accurate.

“It’s easy to relegate cybersecurity to a secondary concern, but at HawkEye 360, data security will be woven into the DNA of the business,” Herndon said. “By providing trustworthy data and ensuring the security of our operations, HawkEye 360 can change the way our customers see the world.”

Before returning to government service in 2017, Herndon founded TechCentrics, Inc., a management consulting company. He has held C-Level and senior IT leadership positions with several federal government systems integrators, such as CSRA, SRA International and MorganFranklin. He holds a bachelor’s degree in electrical engineering from the University of Maryland.

More information about HawkEye 360 can be found at www.he360.com.​