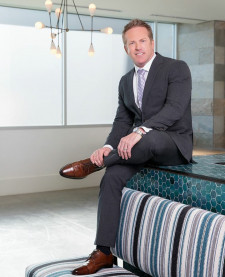 SCOTTSDALE, Ariz., January 18, 2021 (Newswire.com) - It is no secret the field of Aesthetic Cosmetology is one of the most popular and profitable practice. From laser hair removal to body contouring, many advancements and procedures are introduced every year. And one such advancement is "TruSculpt ID."

So what is TruSculpt? We reached out to Charles Small, founder of the Three Best Rated® award-winning Med Spa, Glo Med Spa, for a proper explanation.

"TruSculpt is a new technology that uses heat and radiofrequency to destroy the fat and tighten the skin at the same time," Charles explained, "This is a quick 15-minute procedure that can reduce about 24% fat in the first treatment," he further added. And the best part? There is no downtime, no bruising, and no nerve irritation. In fact, the radiofrequency used in the treatment will tighten the skin.

While CoolSculpting uses cold and freezes the fat cells, TruSculpt uses heat to destroy the fat cells. But unlike the CoolSculpt, it does not need to grab onto areas of skin and excess fat. The radiofrequency will heat up the fat cells and begin to shrink them, and the cells will continue to shrink after the treatment. Though the heat might cause a little discomfort and sweating, so the treatment won't be much painful.

Charles Small founded Glo Med Spa in 2013. Prior to that, he was working in critical care for 15 years. "After working 15 years in the hospital, I felt like I needed a change," he says. He started Glo Med Spa in a small 10x10 room with only $7K he had at that time. Now it is one of the biggest medspas in all of Arizona.

Charles is an expert in basic and advanced techniques of botox and Juvederm injections and has won several awards in the cosmetic field. "I have been recognized nationally for my work in the aesthetic field and have been nominated several times for national awards," he says.

"I always believe in staying ahead of the curve when it comes to new cutting edge procedures," he further added. In 2020, during a pandemic, they grew 30% compared to the previous year. And he plans to continue to grow and lead the way in cutting edge treatments this year too.

Charles and his team are excited to be listed on Three Best Rated® again, "I am always humbled and appreciative when I get nominated for any type of award. Thank you for allowing me to be a part of the Three Best Rated®," he says.

To know more about their services or book an appointment, visit their website, glomedspas.com.