Celebrate the Victory Over Evil With This Newest Ukrainian Release 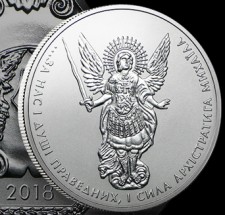 New York, NY, January 24, 2018 (Newswire.com) - Known especially for his role as the protector and patron saint of Ukraine and specifically its capital, Kiev, Archangel Michael is beloved and globally celebrated for his biblical victory over evil. As the story goes, the Archangel Michael, who is a figure in Judaism, Christianity, and Islam, led an army of angels against the forces of Satan and successfully defeated him, an undeniable triumph of good over evil. This beautiful coin, minted in high quality .9999 silver, is produced by the National Bank of Ukraine, and is both fully backed by the Ukrainian government and is legal tender of the country.

The obverse of this exciting new release depicts the Ukrainian Coat of Arms and is inscribed with “National Bank of Ukraine” in Ukrainian. The reverse features a spectacular image of the Archangel Michael, with his wings spread wide and sword drawn along with a circular inscription drawn from the famous Ukrainian poet, Taras Shevchenko, that when translated into English reads: “For us and the souls of righteous men, and Archangel Michael’s strength”. The National Bank of Ukraine limits the mintage of this coin every year, typically at 4,000, although they haven’t announced this year’s limit yet. Order now and ensure you won’t miss out on this beautiful celebration of the patron saint known for his protection of the sick, as well as for his patronage of police officers, paramedics, firefighters, and the military.

A View of the Past, a Vision to the Future
The American Liberty One-Tenth Ounce 2018 Gold Proof Coin is now available from Bullion Exchanges.
Bullion Exchange LLC - Feb 8, 2018
Newswire