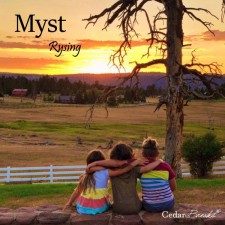 SALT LAKE CITY, July 17, 2020 (Newswire.com) - Cedar Breaks® is pledging all the proceeds from their music and books for a month to help those in need in these trying times.

One band member mentioned a song and music video that they released in 2019 that prompted them to take action. “We released a song called 'Myst' that had an almost eerie prediction to what we are going through in 2020. Because of this, we became determined to do more than just sing about the issues that we are facing.”

In the Myst music video, the story is told through a dancer metaphorically raising the 'myst' that surrounds us. Showing that as we stand in the service of others with acts of kindness, the air clears and the momentum grows. Others then grasp the vision, join in, and become a strong force for doing good and positive change. The message is powerful and timeless. Cedar Break’s dancer, Chanel Kostich, is highlighted in the video.

The Band is also offering a free song for which they will donate one dollar for each download to those in need, up to 25,000 downloads, from their websites at www.cedarbreaksband.com and www.upondestinyssong.com.

The band hopes that other artists will follow suit.

Cedar Breaks is known for rich harmonies, strong messages, beautiful cinematography, and a fresh new sound. The Band believes that the message of their songs and media has the power to help ask the right questions and suggests answers for those who take the time to listen.

Cedar Breaks® Band, a part of Empath Media LLC, has won friends across the country with award-winning music and films. Cedar Breaks® Band's messages of faith, family and heritage continue to build religious and cultural bridges worldwide. The Utah band's films and music have been screened at festivals across the country, netting the band over 60 awards, including best country song, best music video, best short video, best rock song, best gospel song, best musical documentary, best historical documentary, and best of the year. Their music also can be found in the Historical Novel “Upon Destiny’s Song.”

Band member Mike Ericksen is quoted as saying, “Having our music showcased in diverse festivals is exhilarating and humbling.” He went on to say, “It seems that there is a lot of room for tolerance and the celebration of our common values."