Carol J. DeMars' New Book 'Penelope's Song' is a Brilliant Novel That Brings Remarkable Tales of the Past Into the Modern World

Recent release "Penelope's Song" from Covenant Books author Carol J. DeMars is an incredible narrative that is a mixture of both history and fiction, where it ties together a story of the past that depicts the worlds of different characters whose lives are rough yet fruitful. 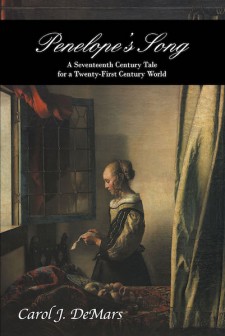 SMYRNA, Ga., December 2, 2019 (Newswire.com) - ​Carol J. DeMars, a sociology major and a teacher, has completed her new book, “Penelope’s Song”: a profound work that contains heartfelt stories and fascinating encounters in journeys from centuries past.

Carol writes, “It was the gouden eeuw, the 17th-century golden age of the United Provinces of the Netherlands, and nowhere was it more glorious and prosperous than in Amsterdam, Holland, the mother city of Nieuw Amsterdam, situated by the deep harbor of Mannahatta. Why then would the vivacious niece of a wealthy Dutch merchant hastily marry her father’s brilliant student to venture across the dangerous Atlantic Ocean to start their lives together in one of the least desirable outposts in all of the Dutch Empire East or West? Meanwhile, an aristocratic English widow fled the land of her birth, where to a manor bred and manor wed, and departed for New England seeking liberty of conscience. Expecting her only son, Sir Henry, to join her when their family affairs were in order, Civil War erupted in England. Loyal to the monarch who bestowed his knighthood, Sir Henry became a Cavalier fighting for King Charles I. Just when it seemed there was finally an end to war in England and finally at peace, although tenuous, with Eastern Woodland Algonquians up and down the North Atlantic Coast, the English Parliament led by Oliver Cromwell sparked a trade war for supremacy on the high seas that threatened to topple the vast Dutch Empire and destabilize their lives again. For them and legendary couple Richard and Penelope Stout, once more dreams were deterred by the desperate drama to come. Now you, the reader, are invited to discover what their lives, the real heart of history, have to do with you and our 21st-century world.”

Published by Covenant Books of Murrells Inlet, South Carolina, Carol J. DeMars’ new book is an exciting discovery that will take the readers backward in time and into the lives of various people who hold their own stories that will definitely stir hearts.

Readers can purchase “Penelope’s Song” at bookstores everywhere or online at the Apple iTunes Store, Amazon, or Barnes & Noble.

Noel Lloyd Srednuas's New Book '2045' is a Riveting Novel, Offering a Spiritual Critique of Today's Social Order and God's Hope for a Better Future for Mankind
Recent release "2045" from Covenant Books author Noel Lloyd Srednuas is an engrossing narrative that explores a more inclusive future for humanity in the year 2045. It offers an alternative vision birthed in response to the chaos of today's headlines and a Donald Trump presidency.
Covenant Books - Jul 8, 2020