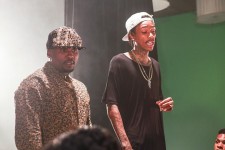 San Diego, Ca, April 6, 2017 (Newswire.com) - San Diego, California is the hometown of the new and up and coming artist Liggy; who is headed to the top of the charts. Growing up in California gave Liggy his exposure to the emerging West Coast G Funk music culture. This style music was heavy with whistles, synthesized instruments and gangsta rap lyrics. Liggy’s household all varied in their musical tastes and influences, however, he was quickly swayed by the different sounds. These sounds varied greatly, including busy bass lines and gritty rhymes that he heard in the albums that his brother would bring home from New York to the R&B that serenaded his parents and even a variety of pop-laden beats that his tree sisters blasted.

At the young age of ten, this military brat moved to Chesapeake, Virginia when his stepfather who was in the US Navy was stationed there. At this point in his young life, Liggy realized that his childhood was full of differing regional music styles and this made his outlook on the craft not only unique, but it created his unrivaled delivery and ability to permeate every component of composing music with his signature style. This style is what has made Liggy successful in expressing himself thru his music.

“I feel as an artist you’re not really expressing yourself."

"You have these talents and you let them slip away because of opinions, jealousy or lack of confidence. I care for none of these, so my musical style will always be different. My slogan is ‘Stay Active Always’ because that’s what you have to do in order to do things others can’t."

Since 2003, Liggy has released 14 online albums and numerous hit singles that have been produced by many well-known producers in the industry. Liggy recently released his debut single featuring Wiz Khalifa “Fighter Jet” which was produced by Grammy Award producer Nate “Danja” Hills, known for his associated acts such as; Justin Timberlake, T.I, Diddy and Brittney Spears. Most recently known for his production of “Shining” featuring DJ Khaled, Beyonce and Jay-Z.

Liggy is a talented artist that you do not want to miss out on, be sure to look for his music on Itunes and coming up soon be on the lookout to hear his music on the Top Billboards.