Brian Evans and Theodore Hamby, III have both come up with a new novel, "Savannah," now in kindle and paperback (it will be released on Audible.com this month). Evans other novels include "Horrorscope," "Horrorscope II," and "The Funny Robbers". 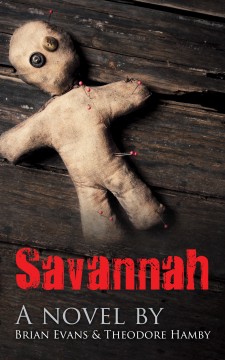 The story is about a woman who uses her ability with voodoo dolls to enact revenge on, well, those who tick her off.

In her earlier years, those abilities were only used to obtain justice on those who committed heinous crimes, but as her years grow on her, it’s probably not best to cut her off at the check-out line at your local grocery store.

Based in Savannah, Georgia, the book tells the story of a woman with some axes to grind, and her grandson’s concerns over her actions. It's now available in paperback at Amazon.com, as well as in kindle. It will be released in audio book on Audible.com this month.

Evans has previously released the books “Horrorscope,” “Horrorscope II,” and co-wrote “The Funny Robbers” with Carrot Top manager Dan O’Leary, currently in development to be a major motion picture, as are the “Horrorscope” books, which Evans co-wrote with Mark Andrew Biltz and Helen Bousquet.

Evans has also launched “Creature,” a series of “Hardy Boys” styled mini-mysteries in the style of the “The Twilight Zone.” His first book, “Creature – Episode 1 – There’s A Clown In The Basement” just went on sale, and several other “episodes” are now also available and in pre-sale at Amazon.com. A pilot episode based on the book series is being planned as a TV show which will co-star comedian Carrot Top, also an executive producer of the series concept, along with his manager, Dan O’Leary.

Also a singer, Evans is preparing to record his latest album, along with an album entirely recorded as a Halloween record, with a music video planned to be filmed in Transylvania.

“Go big, or go home,” says Evans. His music video “At Fenway,” co-starring William Shatner, has garnered almost 12 million views on YouTube. The song was produced by multiple Grammy Award winner Narada Michael Walden, known for his work with the likes of Whitney Houston and Aretha Franklin. Shatner and Evans have performed several concerts together, and have another show coming up on Maui on December 30th.

All of Evans’ books are available at Amazon.com, Barnes & Noble, and also in audio book at Audible.com.

He also released a music video, “Here You Come Again,” which co-stars Dog The Bounty Hunter, and once again, William Shatner. Leland Chapman, who also makes an appearance in the music video with comedian Paul Rodriguez, will co-write one of the “Creature” mystery novels with Evans called, “The Dog,” about a K-9 that seeks revenge for the murder of the police officer who owns him.

“We are constantly putting things together, and it’s fun to involve new people in what we’re doing,” says Evans.

Evans will write several other novels in the next year including "Shark," "Sandman," "Horrorscope III," and an autobiography. He says they will be his final novels outside of the "Creature" series.

"If you want to do something, you just do it. No one tells me no. I just do it," says Evans. His recordings of "Maui Moon," (co-written with Kainoa Jacinto of Maui) "Planet Blue," and the music video "Here You Come Again," as well as the audio book for "Savannah," are all up for consideration for this years Grammy Awards.

Evans, who also produces The Maui Celebrity Series (he opens for the headliners who comes to town, along with providing local comics the opportunity to open), has brought the likes of Bob Saget, Louie Anderson, Roseanne Barr, Mos Def, Jeff Bridges, and others to the island.

"I like to stay busy. I'm not a talker," he says. "Life is too short and there are too many people waiting in the wings," says the author/singer, who has served as opening act for stars ranging from Joan Rivers to Social Distortion. Evans does intend several live concerts next year, including a run in Las Vegas that has been swirling around Sin City for quite some time.

Evans resides on Maui, in the state of Hawaii, but will share time between Maui and Scotland in the not so distant future.

Crooner Brian Evans to Release New Soccer Song Worldwide October 2
Evans, known for his music videos 'At Fenway' and 'Creature at The Bates Motel,' will release the only big band soccer song ever on Oct. 2
Brian Evans News - Oct 2, 2018
Newswire