SCOTTSDALE, Ariz., February 27, 2018 (Newswire.com) - Bob Powers, Owner of Mesa franchise of Arthur Murray® Dance Centers, and Julia Gorchakova, Co-owner, Artistry in Motion, have joined Noticed©, an invitation-only service for distinguished professionals. Powers and Gorchakova have been chosen as Distinguished Dance Industry Professionals™ based on peer reviews and ratings, dozens of recognitions, and accomplishments achieved throughout their careers.

Powers and Gorchakova outshine others in their field due to their extensive training, numerous awards and recognitions, and career longevity. Based in Scottsdale, Ariz., the husband and wife duo hold the record for the most United States Championships ever won by an American couple.

Dancers are becoming younger, and I attribute that to shows like Dancing with the Stars. They're young, good-looking people, on national television, so it's given us a facelift. It used to be something that your grandparents did, and now it's the cool thing again.

When asked about how she and Powers met and the beginning of their dance career together, Gorchakova said:

“I started dancing when I was six years old. My mother had a dance studio in Russia. In 1991, a group of Americans came to see the city on a dance tour, and my mother threw a party in her studio so they could meet Russian dancers. I met Bob at the party, and we had a couple of dances. The organizer of the event, who brought the Americans, recognized our chemistry and so he asked me if I wanted to come to American dance. I said yes, and the rest is history.”

Since joining forces, Powers and Gorchakova have become twelve-time undefeated U.S. Rhythm Champions and three-time World Mambo Champions. Over the years the two have toured and performed throughout the U.S. and across the globe in countries such as China, Germany, Japan, Holland, France, England, Mexico, and Canada.

Now mostly retired from competition, Gorchakova designs custom handmade ballroom dance costumes with her company Artistry in Motion while Powers is a traveling coach and the owner of the Mesa franchise of Arthur Murray® Dance Centers. They are also co-owners of Core Rhythms, a top-selling aerobic dance fitness program sold throughout the world.

As one of the most prominent ballroom dance instructors in the United States, Powers is keenly aware of the latest trends in the dance world. In particular, he notes that while dance had fallen out of fashion with American youth, it has recently made a comeback thanks in part to popular reality television shows about dancing. As he notes, this is a heartening change for the industry:

“Dancers are becoming younger, and I attribute that to shows like Dancing with the Stars. They’re young, good-looking people, on national television, so it’s given us a facelift. It used to be something that your grandparents did, and now it’s the cool thing again.”

Hoping to be part of that change, Gorchakova and Powers are highly involved with the World Dance Arts Foundation, an organization dedicated to promoting and providing ballroom dancing to children throughout the world. The WDAF currently provides instruction to over 4,000 children enrolled in the program as well as donates hundreds of thousands of dollars to children’s dance organizations. Additionally, Gorchakova and Powers recently held a benefit performance in which they raised around $4,000 for hurricane relief.

Noticed© has written this news release with approval and/or contributions from Bob Powers and Julia Gorchakova. Noticed is an invitation-only reputation management service that is dedicated to helping professionals stand out, network, and gain a competitive edge. Noticed selects a limited number of professionals based on their individual recognitions and history of personal excellence. 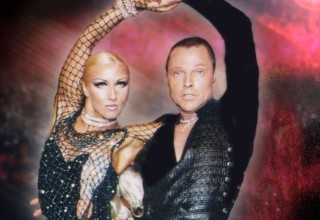