Capital Access Group announced today that it arranged $10,206,540 million in total project financing for Auxin Solar, Inc., to purchase a 99,576 sq. ft. building located at 6835 Via Del Oro, San Jose, CA. The company currently has 90 employees with expansion plans that will support the creation of approximately 40 new jobs. 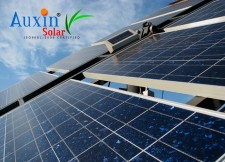 Founded in 2008, Auxin Solar is a leading manufacturer of U.S.-made solar panels, solar mounting racks, and solar energy-producing systems with a reputation for having the highest quality panels at the most competitive prices. Auxin has an international customer base for its panels and mounting racks, and has developed turnkey commercial and residential solar systems in Europe, Australia, and the U.S.

"The SBA 504 program is a great example of a government program that works. It goes directly to the bottom line, and it creates jobs."

“We were leasing a 27,000 sq. ft. facility, but the business is growing very rapidly, and we recognized that a year down the road we would need a larger facility,” said Mamun Rashid, co-founder, Auxin Solar. “Owning the building allows us to make infrastructure improvements, plus we are now free to install our own solar system technology to power ourselves. The building will also allow for expansion without having to relocate. Essentially the facility allows us room to grow for the future.”

“The SBA 504 loan made a huge difference in the sense that it enabled us to secure a loan at the onset of our growth. As a growing business, without a history of several years of revenue and positive cash flow, we wouldn’t have had the option to buy this building if we took the traditional path with a commercial bank. It would have been too expensive,” said Rashid.

“Auxin Solar is such an exciting business, and we are proud to partner with them to provide 504 financing that will facilitate the creation of dozens new jobs,” said Cara Rudy, Vice President, Capital Access Group. “Owning the building instead of leasing will help the company control costs because they don’t have to worry about lease expenses going up, plus they can make significant infrastructure investments that wouldn’t have been possible in a lease situation.”

“Cara (Rudy) from Capital Access Group worked with us every step of the way,” said Sherry Tai, co-founder, Auxin Solar. “There is a lot of paperwork, and it’s intimidating for a company like ours in the early stages of growth, but Cara held our hand through the whole thing.”

“The SBA 504 program is a great example of a government program that works. It goes directly to the bottom line, and it creates jobs,” said Tai.

About Capital Access Group: Capital Access Group is a leading statewide Certified Development Company based in San Francisco, authorized by the U.S. Small Business Administration to provide long-term, fixed-rate financing through the SBA 504 loan program, which offers 90% financing to business owners for the purchase, renovation, or construction of commercial real estate for their growing businesses. Founded in 1981, Capital Access Group has helped thousands of entrepreneurs grow their businesses and realize their dreams of owning their own buildings. Currently, the SBA 504 interest rate is 4.31%, fully amortized and fixed for 20 years. For more information, please visit www.capitalaccess.com.

Capital Access Group (www.capitalaccess.com) is a commercial real estate lender specializing in SBA 504 loans for growing businesses. The SBA 504 program is one of the best financing options available for small business owners today.