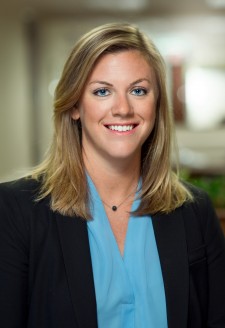 Michael D. Neubert, a Principal at Neubert, Pepe & Monteith states, "We are thrilled to have Emily join our firm and our Medical Liability Defense group. The skills she developed clerking at the Appellate Court will be a great asset to us."

We are thrilled to have Emily join our firm and our Medical Liability Defense group.

Prior to joining Neubert, Pepe & Monteith, Ms. Souza was law clerk to the Honorable Eliot D. Prescott at the Connecticut Appellate Court in Hartford. She began her legal career as a research clerk for trial level judges of the Superior Court. There, she served as criminal law specialist for the Connecticut Judicial Branch’s Legal Research Office, acting as the primary resource for judges and co-clerks on issues related to criminal law. In addition, she has held intern positions at the United States Attorney’s Office, Office of the Corporation Counsel for the City of New Haven, and the State’s Attorney’s Office.

Ms. Souza is admitted to practice in Connecticut. She and her husband currently reside in Milford, Connecticut.