Entrepreneur Tim Schmidt has launched his highly anticipated book with a splash of genius that's being met with both laughs and criticism. The author of "Amplifying Average - 15 Lessons to Help the Average Person Level Up Their Life" donned a t-shirt on the cover with the logo of the notorious Orchids of Asia massage establishment made famous by New England Patriots owner Robert Kraft. 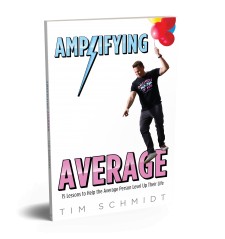 FORT LAUDERDALE, Fla., November 20, 2019 (Newswire.com) - Tim Schmidt announces the release of his new book, Amplifying Average. Written to help inspire people who are born into “average situations,” according to Tim Schmidt, Amplifying Average outlines 15 lessons he’s picked up along his own entrepreneurial journey that he feels others can easily digest and begin using in their daily routines.

“One of the chapters is called ‘Be Memorable,’ and I couldn’t possibly think of a better way to practice what I preach than wearing something that would draw the ire of critics and get some belly laughs out of people who get it,” commented Schmidt in reference to his book cover. “There are people who play life the safe way, and people who go out on a limb. I like to be the latter in just about everything I do,” he added.

Schmidt credits a trip to Key West for the inspiration to wear the shirt on his inaugural book cover. “We were celebrating my best friend’s 40th birthday, and it was fresh off the infamous massage parlor incident, and when one of the guys came down with these t-shirts, we wore them as a group for an entire day. Everyone wanted photos with us.”

Going further into a lesson outlined in the book, he added “I ran the idea (of wearing that shirt) by many people. They hated it. Right there, I knew I had to go against societal belief and be a contrarian thinker.”

Schmidt, raised in the Twin Cities area of Minnesota, claims he “grew up” once moving to Miami Beach, Florida, citing living outside his comfort zone as the wake-up call he needed to jump-start his life. “I was too young to be in a rut, be complacent, and not try different things. Leaving my family and friends to journey so far away was the most difficult thing I had done at that point, but it wasn't the tip of the iceberg in terms of facing obstacles.”

Facing “astronomical prices to catch a buzz, dine out, or even park his car,” he had to figure out how to generate an income, and fast. Amplifying Average highlights how mounting debt, a new environment, and the desire to never have a boss led to unlocking many life hacks that can be put into play by anyone seeking independence.

Everything from how you position yourself while dining out, to being able to pivot when the landscape of a market simply begins to change climates, there are many takeaways that can help people not born with wealth to rely on, uncanny athletic or musical talents, or other situations that make success in life rather achievable. Amplifying Average is an inspirational tale about getting motivated when you least have the desire to do so, finding shortcuts when everyone else follows a road map, and being situationally different so you can stand out from the crowd.