9 Best Travel Movies to Watch if Self-Quarantining (Stuck Inside), According to JustFly and FlightHub 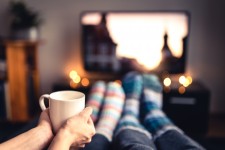 SEATTLE, March 26, 2020 (Newswire.com) - ​​Movies, without a doubt, are one of the most powerful cultural mediums. They combine the beauty of photography, the movement of real life, the sound of music and a never-ending variety of stories. These 9 movies take viewers on adventures with meaningful messages that depict the realities, wonder and beauty of travel.

Julia Roberts plays Liz Gilbert, a career woman with what she thought was the perfect life. She had great friends, a husband, home and money—until suddenly she no longer did. Amidst mounting confusion about her life and a divorce, she reaches a crossroads. Liz’s journey takes her to Italy, India and Bali, where not only does she discover parts of the world, she rediscovers herself.

Based on the 1996 book by Jon Krakauer, Into the Wild recounts the story of Christopher McCandless (Emile Hirsch), a well-to-do college graduate from the suburbs. Inspired by the writings of London and Thoreau, the top tier student athlete turns his back on society and material possessions. Instead, he sets off on an adventure, into the wilderness of Alaska.

Under the Tuscan Sun

When Frances Mayes (Diane Lane), a writer in her mid-thirties separates from her husband, she struggles with depression as well as writer’s block. At the behest of her best friend, she travels to Italy where she impulsively buys a home in the Tuscan countryside. She goes about rebuilding her life while encountering a series of unique people along the way.

When their father passes away, 3 brothers, Francis (played by Owen Wilson), Peter (played by Adrien Brody) and Brody (played by Jason Schwartzman) come together for a trip across India. Estranged for more than a year, the siblings have much to discuss about their respective lives. The brothers behave as siblings typically do, until Francis reveals the real reason they’ve reconnected.

Up in the Air

George Clooney plays Ryan Bingham, a corporate downsizing specialist. As he mentors a new young colleague (played by Anna Kendrick), he tries to show her the importance of face to face exit interviews with employees who are being let go. As the movie progresses, Ryan meets a woman for whom he develops feelings, which in turn causes him to reconsider how he previously approached work and life as a whole.

Based on the true story of an Austrian mountain climber (played by Brad Pitt), Seven Years in Tibet tells the story of Heinrich Harrer. His efforts to climb a Himalayan mountain were cut short by World War II. Later, he winds up in Tibet. He meets the young Dalai Lama, and they begin what becomes an unusual yet mutually beneficial friendship, until the unforeseen unfolds.

The Secret Life of Walter Mitty

Seemingly stuck in a monotonous job at a large corporation, Walter Mitty (played by Ben Stiller) becomes entranced in a world of adventurous daydreams. He makes himself the protagonist of these imagined journeys. With a real world stroke of luck, Walter is assigned to bring back the perfect photograph for his company’s last printed magazine issue.

Bob Harris (played by Bill Murray) is an older movie star declining in popularity. Charlotte (played by Scarlett Johansson) is recently married and uncertain about the direction her life has taken. They meet randomly and form a deep and unusual connection in the heart of one of the most high-octane cities in the world—Tokyo.

When a chance encounter turns strangers Carter Chambers (Morgan Freeman) and Edward Cole (Jack Nicholson) into hospital roommates, a friendship begins to form. The men have very little in common, except for 2 things: both need to make peace with the lives they’ve lived, as well as a bucket list they want to see through until the end. At long last, they depart on an adventure together.

JustFly makes travel accessible, allowing more people to visit new places and explore different cultures by offering the cheapest flight on worldwide destinations. This is achieved by investing heavily in both technology and people, streamlining and optimizing the customer experience. Visit justfly.com to book online or call an agent at 1-800-717-5015 for 24/7 service. For inspiration on travel destinations, tips on budget travel, and the latest travel news, follow JustFly on Facebook, Twitter, Instagram, and Pinterest.

Justfly was created by a team of technological experts with many years of experience in the travel industry. We believe our platform is second to none when it comes to issuing low cost tickets efficiently in a user-friendly environment.

JustFly and FlightHub on Health and Safety During Travel
JustFly.com - Mar 19, 2020

FlightHub and JustFly Help Travelers Make the Most of Their Layover
JustFly.com - Mar 10, 2020

JustFly and FlightHub Suggest Things to Do Down the Bayou
JustFly.com - Mar 9, 2020