Liv to Give Donation Allows for New "Buddy" Costume for SDPB

SDPB benefits from Liv Hospitality's Liv to Give Fundraiser 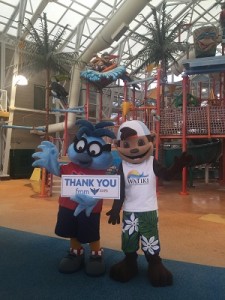 Rapid City, SD, December 22, 2016 (Newswire.com) - Through the generosity of our customers, the annual Liv to Give fundraiser event held at WaTiki Indoor Waterpark resort in April 2016 donated $5,000 to South Dakota Public Broadcasting (SDPB).  The donation was used in part for a brand new costume for the SDPB Mascot, Buddy, giving him a well-deserved makeover.

Buddy is the fun, cuddly embodiment of the familiar SDPB blue bird. He plays host on his own part of their website http://www.sdpb.org/buddy/ where he showcases all of the programming and activities they have available for kids to watch and interact with.

Thanks to everyone’s charitable contributions on Liv to Give day, Buddy is looking better than ever and back out strutting his stuff – including hanging out with our own KoKo at the WaTiki Waterpark. Thank you again from Liv Hospitality for your support!