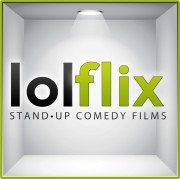 Studio City, CA, December 13, 2015 (Newswire.com) - ​​Fans can celebrate stand-up comedian Brad Williams’ birthday with 1,400 of his closest friends as he films his second Stand-Up Comedy Special, by being a part of the live filmed audience (special to premiere Spring 2016). lolflix, the premier provider of original stand-up comedy specials, announced that they have partnered once again with Brad Williams to produce and film his second one-hour stand-up comedy special January 16th at 8pm at the Alex Theatre in Glendale. “His debut special was such a hilarious and great success, I was completely mesmerized watching Brad develop, hone and take this second all new one hour to whole new level in such a short time. It’s truly an amazing follow up”, said director/producer Scott Montoya. In Brad’s latest live stand-up comedy special Brad Williams delves deep into race, political correctness in only a way that Brad can, and ties it all into how his father raised him to deal with challenges and adversity leading up to how his family had to deal with it’s greatest challenge yet. The special is more personal for Brad than the last special “Fun Size” (DVD @ Amazon) that aired this year on the Showtime Network to rave reviews and became one of Showtime’s highest rated comedy specials for 2015. “I take more chances and talk about more things that I never thought I could joke about onstage” shared Brad.

VIP Meet & Greet tickets are $50 and General Admission is $20 per ticket. Tickets go on sale Wednesday, December 16th. Tickets will be available online at http://www.alextheatre.org/ or by calling (818) 243-2539. Meet & Greet tickets include: reserved priority orchestra seating, commemorative VIP lanyard, autographed photo as well as photo with Brad Williams…and even share a piece of birthday cake with Brad to celebrate this special night. Physical tickets can be purchased in person at The Alex Theatre 216 North Brand Boulevard, Glendale, CA, as well as two other locations: The Americana at Brand Concierge Desk – 889 Americana Way, Glendale, CA 91210 and the Glendale Community College Auditorium – 1500 North Verdugo Road, Glendale, CA 91208.

Brad Williams has become one of the funniest, most in demand comedians working today. A California native, Brad started doing stand-up at age 19 and has been touring ever since. He has appeared on numerous TV shows including Legit, Deadbeat, Dave Attell’s Comedy Underground, Sam and Cat, Live at Gotham, the Tonight Show, Jimmy Kimmel Live, Mind Of Mencia, and Pitboss. Brad’s one hour comedy special Brad Williams: Fun Size aired on Showtime to not only critical acclaim, but was one of Showtime’s highest rated comedy specials of 2015. In addition to stand-up, Brad has become a dynamic on-air personality as well. His podcast “About Last Night” is a mainstay on the iTunes Charts. Brad’s show is high energy. The late Robin Williams once called him “Prozac with a head.” Brad’s ability to make humorous observations on disability, relationships, sex, and race are winning over audiences and proving anyone can overcome their shortcomings.

Founded by Director Scott Montoya lolflix.com lolflix.com is a web based original stand-up comedy content creator and distributor that produces and presents 100’s of exclusive and original stand-up comedy performances and specials from today's hottest alternative comedians. Montoya has directed 80 + comedy specials, most having premiered on the Showtime Network. Many titles can be viewed streaming online through lolflix.com free as ad supported content as well as viewed ad free as direct downloads to own or to rent. All original content on lolflix services are produced exclusively by LOL Comedy Inc. and distributed by lolflix.com Stand-Up Comedy Films. Follow lolflix online at: www.lolflix.com Twitter: @lolflix  Facebook: @lolflix

With over 25 years experience in all facets of publicity, Events That Rock has represented clients such as Improv Comedy Clubs, Andrew Dice Clay, Comedian Christopher Titus, Sideshow Network, lolflix/LOL Comedy Festival and more.

Ventura County Will Be Rockin' This Friday as Copper Blues Rock Pub & Kitchen Opens the Doors to the Ultimate Dining & Entertainment Experience at the Collection at RiverPark in Oxnard
ETR - Public Relations - Sep 7, 2016