Top Award Winning Picture Agency, Creates New Monthly Feature: A Highlight Reel of the Best ZUMA Press Images of the last thirty days, from over 3,000 top professional photographers and 90 Countries around the Globe 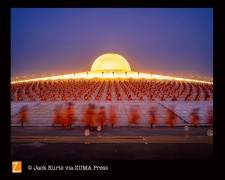 San Clemente, CA, July 8, 2016 (Newswire.com) - ZUMA Press Inc. (www.ZUMApress.com), a leading visual media provider for the editorial community, in honor of Americas 240th birthday, a country built on the pursuit of excellence and press freedom, today announces that it is showcasing the best images of the month (thepicturesofthemonth.com), in a dedicated portal and a YouTube channel called: ZUMA’s Pictures of the Month or ‘POM’, launching a new ‘movie’ every month, going forward.

The Pictures of the Month, is a multimedia experience, an animated gallery of the most dynamic and important images from the past month covering breaking news, reportage, feature, sports and entertainment photojournalism curated by award winning ZUMA photo editor James K. Colton. "For me, as a photo editor for forty plus years, going through thousands of images each day is like being a kid in a candy store. I treat each day as a visual treasure hunt, looking for the hidden gems to be brought to light.” Colton said. POM gives ZUMA Press the platform to showcase and share, some of the world's most compelling photography.

James K. Colton, is Editor-at-Large at ZUMA Press. Director of Photography at Newsweek before joining Sports Illustrated as their Photography Editor. Jury Chairman for the World Press Photo contest 2005, received a “Lucie” award for Picture Editor of the Year 2007, a “Focus” award for Lifetime Achievement by the Griffin Museum in 2010 and has been acknowledged as one of the 100 most important people in photography by American Photo.

The Pictures of the Month, represents the best content from the world’s best picture agencies, newspapers and photojournalists. Please check out this month’s just launched POM and come back each month as we launch the rest of the year in months.

ZUMA Press is a digital media leader, producing and representing top award-winning news, sports and entertainment content. The ZUMA family 24/7/365 curates many of the world's greatest photographers, magazines, newspapers, picture agencies and wire services visual treasures for thousands of editorial clients throughout the world each and every day. Started in the early hours of the Net, in 1992 by photojournalists for photojournalists – the first editorial database on the world wide web to allow downloading – the pioneer digital first picture agency: ZUMA Press is now the world's largest independent press agency and wire service, with over 33 million images available online and adding 33K+ daily.

Germs, Inc. Announces Crowdfunding Raise for GERMS ARE STUPID Line of Consumer Products
'You had fun getting dirty … Now let's have fun getting clean!'
ZUMA Press Inc - May 5, 2021