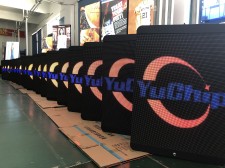 To build a smart city, a bright street light pole will be the central nerve of the city to transmit information. A report issued by the United States Wireless Communications and International Network Association (CTIA) in 2017 pointed out that urban street lights will be an essential infrastructure in the 5G era.

The street LED posters to use an LED display panel to realize multiple functions:

YUCHIP first opened its doors in 2004. As an innovative manufacturer of LED displays, we have grown into a leading brand that is recognized for exceptional value, responsive customer service and product innovation.