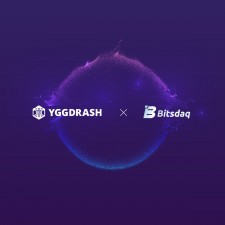 SINGAPORE, September 3, 2019 (Newswire.com) - The price of YEED, the cryptocurrency of an interchain platform project YGGDRASH, is surging after the announcement that it will soon be listed on the Bitsdaq exchange.

Bitsdaq announced last Friday that the trading for YEED against Bitcoin (BTC) will open on September 3rd at 2 p.m. (UTC+8).

The deposit for YEED is already open in preparation for trading, and the withdrawal for YEED will open on Sept. 4 at 4 p.m (UTC+8).

The partnership with Bittrex this January has made Bitsdaq an undoubtful global cryptocurrency exchange for high-quality blockchain projects, and YGGDRASH is well-equipped to be one of them.

YGGDRASH has been nominated for the Top 10 Blockchain Technology Solution Providers in 2019 by APAC CIO Outlook and was the first Korean blockchain project that has ranked 11th place in Cryptomiso and Top 100 in CoinCodeCap.

According to Bitsonic (bitsonic.co.kr), the announcement from Bitsdaq has given YEED a great price surge by almost 42 percent compared to the point a week before the announcement.

David Seo, the CEO of YGGDRASH, said that he is “thrilled to list YEED on Bitsdaq, a cryptocurrency exchange with advanced technology and financial understandings.” He also added that “the listing plan for YGGDRASH is far from over,” expressing the possibility of future listings.

YGGDRASH Introduces a Glimpse of the Future With Interchain at Blockchain Seoul 2019
R2V Inc. - Oct 21, 2019
Newswire