World's Most Expensive Dress Comes to Ripley's Believe It or Not! in San Francisco 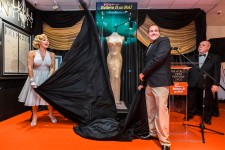 San Francisco, California, August 3, 2017 (Newswire.com) - For a limited time, you can see the iconic “Happy Birthday, Mr. President” dress that Marilyn Monroe wore on May 19, 1962, when she famously sang to President John F. Kennedy for his 45th birthday at Madison Square Garden. The dress will be on display for a month-long engagement at Ripley’s Believe It or Not! Odditorium located at 175 Jefferson St., Fisherman’s Wharf.

On November 17, 2016, Ripley’s Believe It or Not! set a new Guinness World Record for the most expensive dress sold at auction when they acquired the dress from Julien’s Auctions for a staggering $4.8 million.

Add in auction fees, and the dress cost over $5 million, making it the most expensive dress in the world.

“This is the most famous item of clothing in twentieth-century culture,” says Edward Meyer, VP of Exhibits & Archives for Ripley’s Believe It or Not!. Meyer has been acquiring items for Ripley’s for over 39 years and placed the winning bid on the dress. “It has the significance of Marilyn, of JFK, and of American politics.”

Along with the dress, other items from Kennedy’s birthday gala will be on display, including an original program of the event, ticket stub, gala poster, and autographed tiles with Monroe’s signature.

The dress will be on display for a very limited month-long engagement, starting on Thursday, August 3, and leaving after Labor Day on September 5. 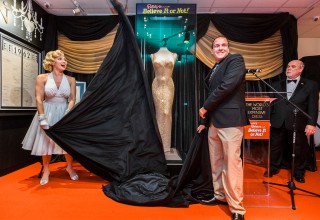 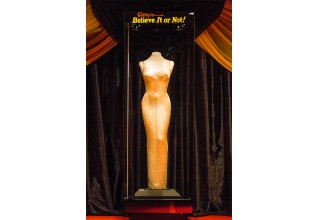 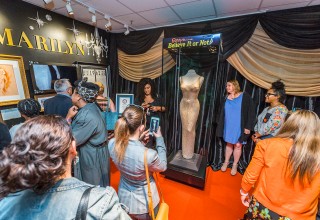 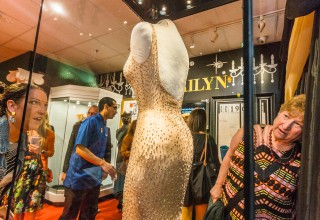 Go Beyond the Bizarre with Ripley's Believe It or Not!
Newest book in bestselling series on sale August 27
Ripley Publishing - Aug 20, 2019