Samera Entertainment goes behind the scenes of Dylan Ashton's CULDESAC, streaming now on Amazon Prime and other streaming services worldwide 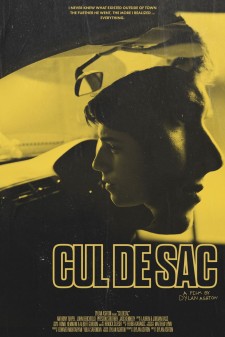 LOS ANGELES, March 28, 2019 (Newswire.com) - Just last year, writer and director Dylan Ashton graduated from U.C. Berkeley. Now, his latest short film, CULDESAC, is having its premiere on Amazon Prime Video. To commemorate the film's streaming debut, Ashton joins Samera Entertainment to discuss how his latest project came about. A portrait of broken youth, CULDESAC follows Kit and Sydney, two brothers who are separated after their parents’ destructive divorce. As they come to terms with the harsh reality, they must also contend with the dead-end town they can no longer call “home.”

The initial concept first came to me about a year after I moved to Los Angeles just out of high school, which was a really scary time for me,” Ashton notes. “I remember I wasn’t even old enough to sign a lease when I first got here since I was 17. It really made me think how much had changed so fast, and I wanted to find a way to capture that duality between how I felt during my childhood and how I felt growing up and just wanting to break out.”

Though, it is apparent that CULDESAC symbolizes Ashton’s struggle to withstand the cynicism that follows us as we grow up. When reflecting on the themes of the film, Ashton explains, “At its core, CULDESAC is about the loss of innocence, that tragic moment in our childhoods when we simply stop believing. By having us discover the film’s harrowing secret along with its characters, we, too, are forced to confront the moments that altered our childhoods.”

Ashton returned to his small Northern California hometown for production and enlisted extra help from his community.

About the experience, Ashton assures that “making [the film] truly was a hometown effort. It was its own bittersweet homecoming. I think we were all overwhelmed by the amount of support everyone gave us. It was a special moment that felt like the culmination of these many experiences we all had growing up together.”

Ashton’s vision for the film became fully realized when he discovered the film's two leads, played by daytime Emmy-nominated Anthony Turpel (The Bold and the Beautiful) and John Berchtold (Manhunt: Unabomber).

“I really owe an enormous deal of what CULDESAC is to them. There finally came to this point where I had to let go a bit because I knew there was nobody better who could embody these characters. As a director, I think that’s all you could ever really ask for.”

“The three of us spent countless hours in their house working on that score. It was incredible energy. I very clearly remember the night we finally landed on what became the CULDESAC theme melody, too. We were all so excited.”

“I was captivated by Dylan’s ability to tap into his generation in a way I hadn’t seen before,” says Leslie Morris, marketing manager at Bounty Films. “He manages to show us the harshness of adolescence while also expressing a profound sensitivity towards that tumultuous time. The film will certainly engage with a new generation of young viewers.”

"These are some of the very best young filmmakers out there,” Carper noted, “I couldn't be more excited for them. This is just the tip of the iceberg.”

With Ashton, one senses it is his spirit for storytelling and his fierce passion to bring his vision to life that makes him something special.

“Film-making may not be the romanticized process that I and many others might envision, but as long as you cherish your vision and fight to preserve the honesty of the story you are trying to tell, you’ve managed to do something great.”

CULDESAC is available to stream now with an Amazon Prime membership. Be sure to click on the link below:

Sharry Flaherty CEO and Founder of Samera Entertainment is a seasoned and well-known film producer and acquisitions agent. Currently, she acquires films for several of the top distribution companies for both Domestic and Foreign sales.

SCMN Consulting is a next level marketing & social media consulting firm. They develop innovative strategic plans based on the rapidly changing consumer market. They blend a mix of the old and new school philosophies to help our clients achieve their goals.