World Dog Alliance: Japanese MPs Urge the Prime Minister to Initiate the 'International Agreement to Prohibit the Eating of Dogs and Cats' 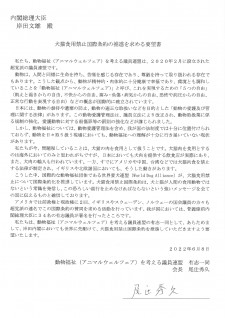 TOKYO, June 8, 2022 (Newswire.com) - 21 members of Japan's Cross-Party Parliamentary Coalition for Animal Welfare requested that the government initiate the "International Agreement to Prohibit the Eating of Dogs and Cats" drafted by the World Dog Alliance (WDA).

The letter states, "The World Dog Alliance (WDA) is advocating for the International Agreement to Prohibit the Eating of Dogs and Cats worldwide, which will send a powerful message to the world to end the barbaric practice of eating dog and cat meat."

Since 2014, Genlin, the founder of the World Dog Alliance, has been travelling the globe advocating for "explicit legislation to ban the consumption of dogs and cats." During his travels, he learned that many developed nations have a coalition of parliamentarians concerned with animal welfare. He then proposed to members of the National Diet, Japan's legislature, the establishment of a Cross-Party Parliamentary Coalition for Animal Welfare. His proposal was implemented in February of 2020.

Unbeknownst to the international community, Japan has a dog meat problem as well. According to investigations conducted by the World Dog Alliance, there are more than 100 restaurants serving dog meat in Japanese cities such as Tokyo and Osaka.

In response, 34 members of the Cross-Party Parliamentary Coalition for Animal Welfare wrote to then-Prime Minister Suga Yoshihide in December 2020, requesting that the Japanese government initiate the International Agreement. This letter exemplified the National Diet's determination to abolish the consumption of dog meat in Japan and signified a turning moment in the nation's history, as it represented a significant advance in animal welfare.

Senator Kenzo Fujisue, one of the letter's signatories, stated, "The United States, Shenzhen, Hong Kong, and Taiwan have all banned the consumption of dogs and cats. South Korea has also made significant progress in this regard. Japan should catch up with the world community by initiating the International Agreement."

In his autobiography, Prime Minister Fumio Kishida describes how he gained the trust of then-U.S. Secretary of State and current U.S. Presidential Climate Envoy John Kerry and his wife by giving them a pillow featuring a photo of their dog, Ben. This account illustrates not only Prime Minister Kishida's diplomatic ability, but also his great understanding of the dog-loving culture of the United States and the international community.

Genlin added, "In 2018, the United States outlawed the consumption of dog and cat meat. The Japan-United States alliance is founded on shared values, and both countries have a history of appreciating dogs and cats. I expect that Prime Minister Kishida will recognize this and initiate the International Agreement to foster goodwill between Japan and the United States through dog and cat diplomacy." 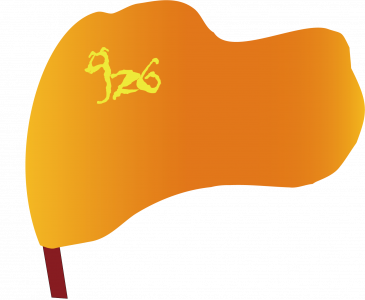