Work Kills® Is Up for Auction on Ebay 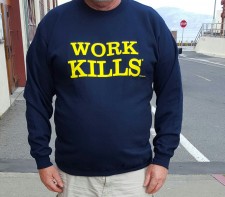 San Francisco, CA, April 21, 2016 (Newswire.com) - “Someone is going to make a lot of money,” said Peter Kagel, creator of the Work Kills® shirt and brand.

“If you want to make some money in this economy you’ve got to find a niche and legally protect it, otherwise the big corporations will wipe you out in a heartbeat.  One of the world’s largest T shirt corporations just tried to jump me by putting up its own Work Kills shirt on Amazon but since I had trademarked Work Kills®, I got them kicked off.  The Work Kills® buyer will have a complete legal monopoly and because it is a brand the buyer will be able to put out other Work Kills® products like a leisure line of clothing.  The trademark also includes mugs.”

To the question “What’s the big deal about wearing a Work Kills shirt?” Kagel responded “Since it encapsulates the psychological state of American workers, they relate to it because they are largely relegated to performing mostly remedial tasks, day after day, ad infinitum.  Buy a shirt and take a test drive and it will blow your mind.  You get high fives, thumbs up, and verbal agreements like ‘You got that one right’ and ‘where can I get one?’ all the time.  It’s a real ice breaker.  A great T shirt is an understatement, a form of irony in which something is intentionally represented as less than it is. Most workers today are miserably stifled in their work, just plain marginalized and totally vulnerable.

Kagel continued “Trump and Sanders aren’t just blowing smoke about returning decent jobs back to the US.  Americans feel the pain of being stuck in their dead-end-meaningless-low-paying-jobs which are tenuous at best since they are largely depersonalized, outsource-able or can disappear overnight by an app.  They can’t take pride in what they are forced to do. In short, many American workers hate knowing and feeling that they are just a number because we were brought up to think that we are way better than that.”

Kagel, responded to the question “So if Work Kills is such a big deal, why are you selling it?” by saying “I’m a Disabled Persons Act California lawyer who emotionally needs to represent the disabled because, since we are all vulnerable to being disabled before we pass, I would rather devote my time and skills in helping those in immediate desperate need who really appreciate my help instead of marketing.  I just get tremendously emotionally uplifted when clients cry with joy because of my successful efforts and by helping them I also get to help all my fellow Americans by putting a big scare into offending corporations and government entities.”

“Creating funny shirts which are understatements is my hobby.  I’ve got a bunch of designs at http://www.KagelDesigns.com but I don’t really have to market them because they don’t have the universal appeal that Work Kills has.  Likewise, I wrote “Advise, Trials and Tribulations of a Country Law,” available on Amazon, which is a legal text book-interesting small town soap opera and travelogue that is full of humor, understatements and but highly educational at the same time.  I just believe that there’s no such thing as too much fun.  It’s in the Constitution.”

Springboard for Creation of Apparel Leisure Line Is the Hidden Value in Work Kills® Auction
Work Kills - May 19, 2016