With Sexual Offenses on the Rise, Women Are Flocking to the Coy App.

Women are finding a safe haven at The Coy App, an astounding new platform with safety as its foundation. 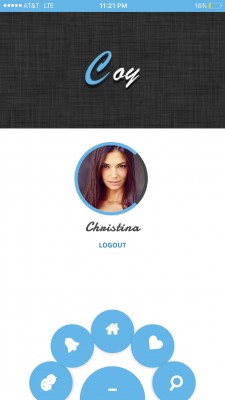 Newyork, NY, June 20, 2016 (Newswire.com) - Women are finding a safe haven at The Coy App. The Coy App, an astounding platform with safety as its foundation, is changing the dating game as we know it!  In the past year there have been over 400 reported sexual offenses in connection with users of dating apps. Unfortunately, that doesn't include all of the cases that remain unreported or fatal. Women desire a place where they feel comfortable connecting with real people, with a focus on building real relationships.

The Coy App is a new visual dating app that allows users to match with each other based on 10-15 second first impression videos. It is the first app of its kind to require a video profile in order to utilize the app and search for matches. This requirement eliminates catfishing - when people create fake online identities - solving a common problem in online dating. The Coy App is also one of the first to be open to an all-inclusive community, supporting users who are straight, gay, bi-sexual, and transgender.

The Coy App has already quickly gained over 2500 users. The Coy App has already been featured on multiple magazine covers, and has secured an invitation to the Dating App Awards. The app serves as a unique, all-inclusive video dating platform for people of all ages, sexualities and locations – including transgender people. The app aims to completely eliminate the 54% of online daters who are catfish by introducing a video feature, allowing users a glimpse into a potential partner’s personality, voice and style – a crucial part of determining chemistry and attraction with a short 10 second video.

“Finally, I have a place I can go that feels like I’m meeting authentic people, its doesn't feel like a dating app at all.”, says Sarah Carter, a user of The Coy App from New York City.  “After using The Coy App I secured two dates in one week, but after meeting the first guy, I immediately cancelled the second because he was exactly who I thought he was and more.  Thank you to The Coy App.”, says Christina Abram.

Once the initial sign-up is completed, a user can determine the kind of person they want to search for with customizable specifics including age, gender, sexuality and distance. When users find someone they like, they send their video as an introduction, and if the person is interested, they send their video in response. If there is mutual interest, then the users can chat and build a connection.

Not only do the video impressions bring a much more comfortable environment to start building lasting connections, users are able to see who they are connecting with. They can pick up hints about other’s personality, voice and style, a crucial part of determining chemistry and attraction. In the age of online dating, it's time for an upgrade. The Coy App is available for iPhone and iPad and can be downloaded at the Apple iTunes Store.

About The Coy App

The Coy App strives to create a unique platform for all communities to build real relationships in a safe and creative environment. Now people can confidently match with others by creating a ‘first impression’ video that best portrays their own personality, therefore eliminating catfishing and allowing the development of real relationships to be made between users.

About The Coy App

The Coy App strives to create a unique platform for all communities to build real relationships in a safe and creative environment.

The Coy App Revolutionizes Online Dating and Takes Over the App Store by Including All Gender Identities.
The Coy App, the first all-inclusive dating app to confidently pair users based off of 'first impression' videos, experiences immense success in just 3 short weeks of launching.
The Coy App - May 26, 2016

New Video Dating App to Include Transgender Profiles, Eliminate Catfishing
The Coy App, announced today its plan to launch its revolutionary iPhone and iPad application to the public. The app serves as a unique, all-inclusive video dating platform for people of all ages, sexualities and locations - including transgender people.
The Coy App - May 17, 2016
Newswire